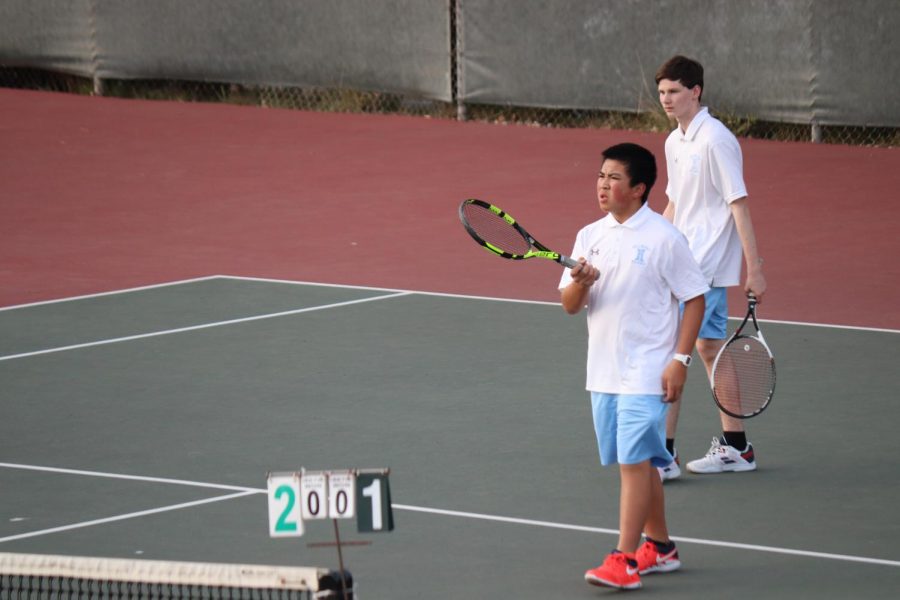 Hillsdale players are dissatisfied with a call during their match.

The Carlmont boys tennis team easily took down the Hillsdale Knights with a 7-0 win in their second varsity tennis game of the season.

With little time to practice and the season just starting, high school tennis players around the district have been working hard to improve their skills in order to get ahead of the other teams.

“We struggled at first because we had a break and we didn’t get time to practice, so even though we’re kind of rusty now, all of us are working hard to improve,” said Daniel Arakaki, a sophomore.

Although the lack of practice gave Carlmont’s team a rough start, they have been able to rapidly improve their skills to keep up with the schools around them. As of now, they have yet to lose a game. This fresh start has given Carlmont’s team members what they need to improve individually.

“We have a lot of good players on the team, so it’s just really fun to be out here playing with the members of our team,” said Iman Shafaie, a sophomore.

Players like Shafie, who help guide the team to success, have recently increased on the team. Many of the players who have been on the team for multiple years have noticed their team’s improvement.

With the team being full of great players, the Carlmont tennis team has been focusing on the team-building aspect of the sport.

“We’ve been working on what goes beyond individual improvement, focusing on molding together and becoming a team,” said Marcus Beltramo, the team’s coach.

The team’s togetherness was evident in their sweep against Hillsdale, where the team did well to support one another throughout the game.

Next, the Scots will face Burlingame at home on Tuesday, March 3.