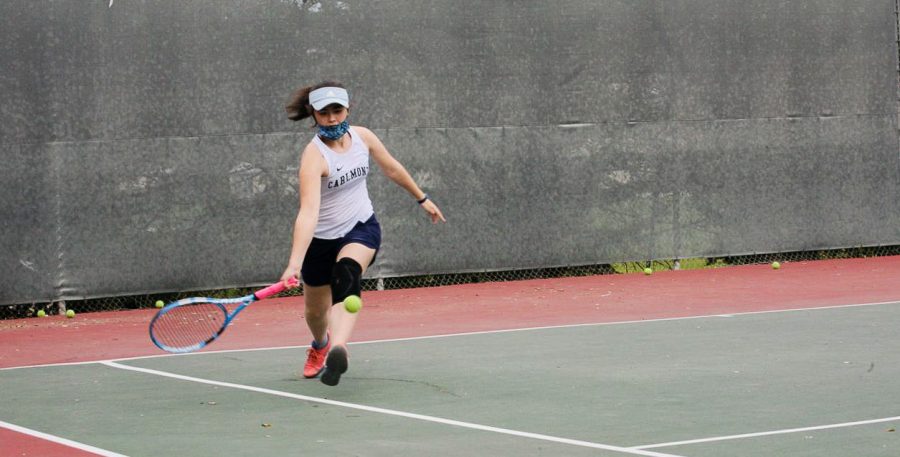 A Carlmont player strikes the ball during her match against Woodside.

With Carlmont sports back in action, the girls varsity tennis team is now on the courts. Maintaining their strong start to the season, the Scots defeated the Woodside Wildcats 7-0 in stellar fashion on Tuesday.

Although league standings are not being counted for the first season, that didn’t stop the Scots from giving it their all. As the matches began, the Scots had a rough start. With the lack of audience motivation and encouragement, physical and mental strength was of the utmost importance.

Going into Tuesday’s match, Naya Salah, a senior, felt confident that they were going to win. Recalling from their previous seasons, she and her teammates knew that the Wildcats did not have a strong tennis program. In previous years, they had won matches against them 6-1 and 4-3.

“This was not going to be an easy match, but I believe that we have more skill and experience with the game to get us the victory. We have so much talent and motivation to play that our overall performance has been spectacular,” Salah said.

Many of the Scots dropped points early in the first sets. However, led by Simone Beilin, a senior, the Scots were able to inch their way closer to the Wildcats, many of them winning their first sets.

“We started off slow in the beginning of the match and we were losing. Then we got a grip of ourselves and maintained a good mentality and team spirit,” Beilin said.

Going into their second sets, the girls analyzed the playing patterns and skill levels of their opponents to help them know their struggles. Sophomore Lisa Borchelt noticed her opponent’s weaknesses and used them to her advantage as her second set began.

“Going into the second set I felt confident. [When the opponent started to come back,] it gave us a lot more confidence and motivation to play harder and know that we are better than them,” Borchelt said.

After starting the season strong, the Scots have high hopes for the remaining portion of their season and for the future of the tennis program.