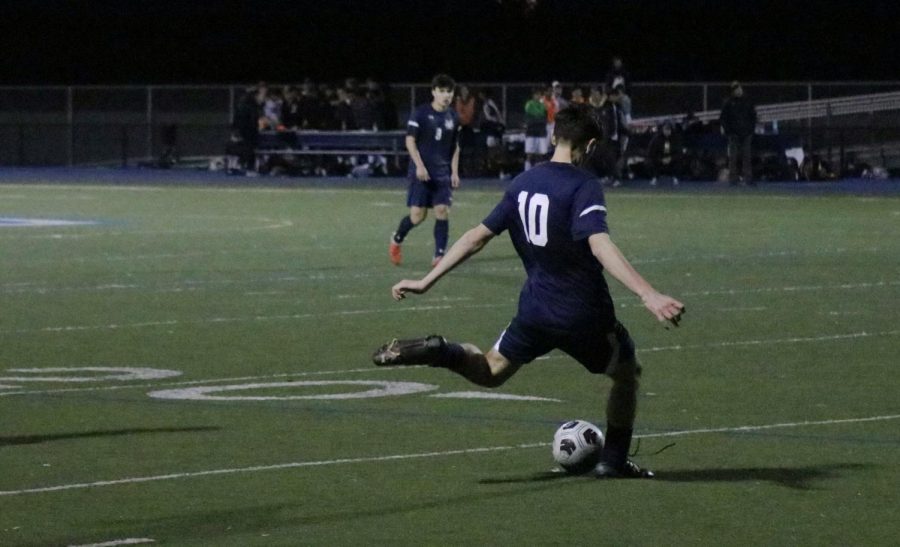 Junior Daran Ebadi takes a free kick for the Scots near the penalty area.

After a hard-fought game, Carlmont’s boys’ varsity soccer team tied Menlo School on Dec. 10. An equal effort from both the Scots and Knights resulted in a 2-2 draw.

Beginning the match with a kickoff from the Knights, Carlmont and Menlo started their fight for possession. Both teams showed a solid effort to control the game, neither successfully established a lead. Ten minutes before halftime, the Knights were able to pass around Carlmont’s defensive line, get a shot off, and score the game’s first goal.

“I think they [Menlo] were amazing playing in small spaces and just playing around our defense altogether. It also has to do with us needing to be more compact in the middle. But overall, they’re a great team. They’re good at finding each other in tight spaces under pressure and just making the field wide and stretching us apart,” said midfielder Ryan Yang, a Carlmont senior.

The Scots played their game with passing combinations. Since Carlmont had three players positioned in the middle of the field rather than the outside, they could find open space and keep the ball within their team’s possession.

Shortly after the Knights scored, the Scots made a comeback when junior Luca Byers-Mora scored and brought the score up to 1-1.

“We want to receive the ball, be able to control it, and finish, and that’s exactly was Luca did,” Carlmont head coach Jose Caballero said.

About halfway through the second half, Menlo was able to find a breakthrough and scored their second goal of the game, making the score 2-1 for the Knights.

“The second goal that they scored, I think that gave us energy and motivation to push forward,” Yang said.

Not even four minutes later, the Scots’ determination sprang into action when sophomore Kotaro Kikuchi shot the ball into the back of the net, making the score 2-2.

After a few more unsuccessful attacks from both teams, the referee blew the final whistle and the game ended.

After this game, Menlo will work on their defense to prepare themselves for the rest of the season.

“Defending. I think we only conceded a few shots, and we can see that they scored two goals, so that’s something that’s got to be better,” Kerrest said.

For Carlmont, fitness will be key for the rest of the season.

“I want to work on fitness. I think we might be one of the only teams in the league that doesn’t do weight training. Instead, most of this team spends a lot of time working on their skills,” Caballero said.

Looking forward to their next game, the Scots will be playing Sacred Heart Prep at home on Dec. 16.