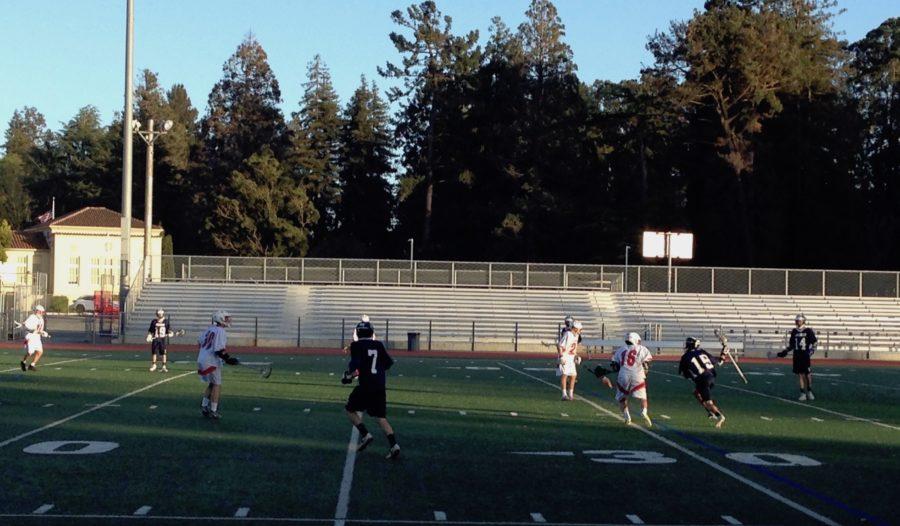 Alex English, a freshman, charges toward the goal, as Nate Durrans, a sophomore, sets himself up for a pass and ensuing shot on goal.

Burlingame won the opening face-off, which allowed them to set the pace for the opening minutes, and eventually the game. The Panthers first struck the back of the net midway through the fourth minute of the game. They won the next face-off and scored later in the quarter.

Another Burlingame goal preceded a late drive by Carlmont. The Scots spent the final minutes of the first half mercilessly charging and shooting at the Panther’s goal. However, each attempt was followed with hustle to catch up to the ball rolling behind the goal, knowing that the half was almost up.

Despite being down 3-0 at the half, Carlmont was still in the game. Ball possession was nearly equal at the half. Brief defensive slip-ups were the cause of Burlingame’s lead.

Rejuvenated after Coach Chris Agbanusi’s pep talk and water, the Scots came out swinging in the second half. Co-Captain Nate Durrans, a sophomore, led a drive to drive up the middle, then tossed it to Alex English, a freshman, who placed the ball in the goal. English jogged to the right of the goal, in the direction of Carlmont’s goal, as Durrans and other Scots trotted over to congratulate their teammate.

Although Durrans would get a three more shots on goal, later that quarter, the Panthers would score three more times. The latter two with one minute and one second remaining, respectively.

The game was sealed when a Panther scored in from the 25 yard-line, bringing the score to 6-1.

During a game in which Carlmont gave up six goals, it seemed evident that the Scots’ defense was porous.

After the game, Max Jacobs, a sophomore, said, “Our offense is pretty good, but our defense needs some work.”

One of the players absent from Monday’s game was Hunter Hawkes, a sophomore, who predicted the troubles: “It’s gonna be tough because our team has some stuff we can work on.”

Despite the depleted squad, Jacobs said, “We just wanted to win, so we played hard.”

The teams were even before Monday’s face-off, as Burlingame shared Carlmont’s record. According to maxpreps.com, on average, the Panthers scored 1.7 fewer points than the Scots.

In the teams previous meeting, last year’s season finale, Carlmont upset Burlingame 5-3 at home. The Panthers averaged more than six goals per game and shut the Scots out  9-0 in that season’s other meeting.

Going into Monday’s game, the Scots (previously 0-4) were in the midst of a tough season. A mere quarter of the team had lacrosse experience before this season.

John Griesbach, a sophomore in his first lacrosse season, believes otherwise: “The season is good, a lot of new players joined and are improving.”

Carlmont will wait a month before venturing back to the Burlingame or a rematch.

The Scots will face off against Mountain View High School next.