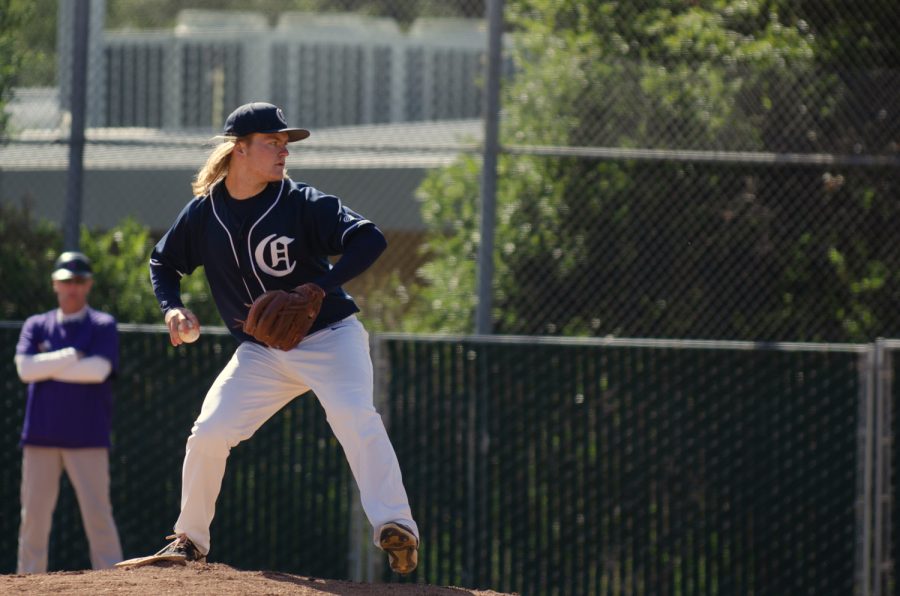 Colton Fisher pitches the ball. "From a personal perspective I'm really happy with how good I've done this year," Fisher said. "It really helps having a supportive team."

Carlmont’s varsity baseball team fought through a close game against Sequoia, eventually winning 1-0 with a walk-off in the seventh inning.

Before the game, Carlmont’s senior athletes were acknowledged with flowers, posters, and a short announcement from their coach as part of the senior night.

The two teams proved to be evenly matched. Quality fielding and pitching kept the majority of the game scoreless.

“We’re rivals [with] Sequoia, so we didn’t really expect it to be any different,” said Ryan Hamilton, Carlmont’s head coach. “It took some good plays on both sides, and we busted through first, and that’s what the difference was.”

Although there were multiple opportunities for runs, both teams fell short on more than one occasion. In the bottom of the second inning, Carlmont junior, Jack Wiessinger tried to run home after a wild pitch from Sequoia but was tagged out.

“I think we had a couple of opportunities baserunning wise to score some runs, which we didn’t cash in on,” Hamilton said. “[We were] a little too hesitant, both trying to steal third and trying to advance on a passed ball, and if those two things happened, we [would] win the game earlier than the seventh inning.”

Although Carlmont got the win, both teams performed well throughout the game. In the top of the sixth inning, a left-field hit from Sequoia almost earned them a run, but Carlmont managed to tag the runner at the plate.

“It was a good game the whole game. Both teams got runners on, but no one came through,” said Dillon Goetz, a senior at Sequoia. “The pitching was really good. And then they pulled through at the end.”

Colton Fisher, a senior pitcher for Carlmont, pitched all seven innings and shut out Sequoia.

The game wouldn’t be the same if it weren’t for the walk-off senior catcher Jack Vanoncini hit in the bottom of the seventh inning.

“It was a close game all the way to the wire and perfect for senior day to end it like that,” Vanoncini said. “Our chemistry is really getting to a high point, and we’re excited to go to CCS with this momentum for sure.”

The game secured first place for Carlmont in the league, and they hope to maintain the same energy for their finals.

“It’s really nice having a team backing you the whole time, being confident in you, and really supporting you,” Fisher said.