Scots win on walk-off versus Sequoia 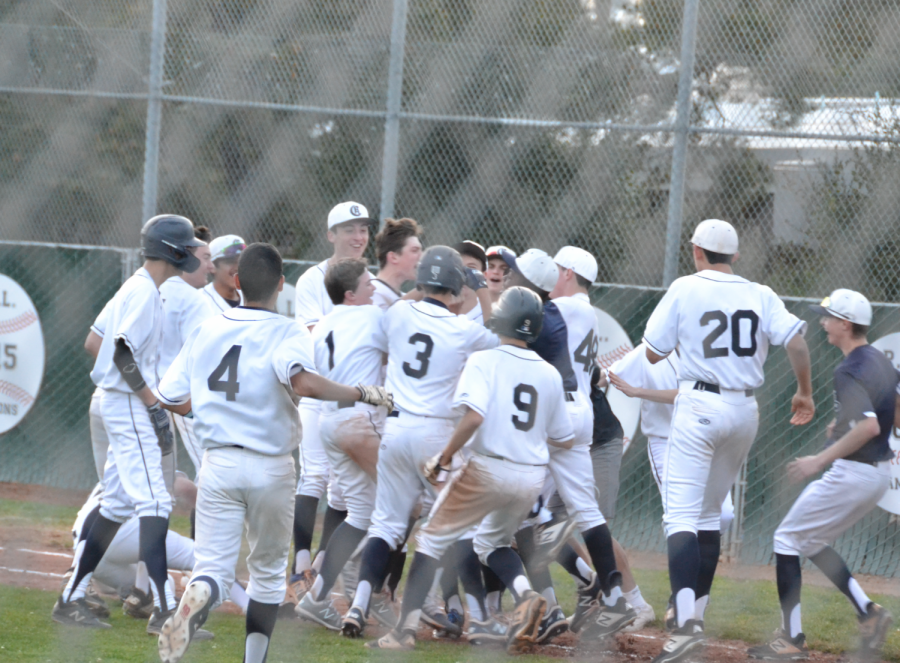 The team rushes to Brady Greene, a sophomore, after he delivered the game winning hit.

Carlmont’s JV boys baseball team banded together and won on a walk-off single by Brady Greene, a sophomore, in a tight game against the Sequoia Ravens.

On Feb. 26, the Scots were down one run the entire game until Greene stepped to the plate in the bottom of the seventh inning. With zero outs and the bases loaded, he delivered a base hit on a line drive to right field as he sent the fans home happy. Timely hits paved the way to a 3-2 victory for the team.

The win was very heroic in the eyes of coach Wayne “Lil Weezy” Baroncini who spoke very highly of the resilience and heart of his team during the aftermath of the game. He also realized that a lot of hard work needed to be put in before the next game that the team played.

“I thought that game was one of the best comebacks so far that I’ve been a part of. I mean they fought hard and played hard. You best believe we’re going to work on a lot of stuff before the next game,” Baroncini said.

Self-confidence and heart allowed the boys to make a push late in the game to retain the lead and seal the victory.

Stellar pitching from Ozzy Ramirez, a freshman, and a big hit from Brad Ayers, a sophomore, led to the eventual winning hit from Greene. Ayers led off the bottom of the seventh inning strong with a single that represented the tying run.

“That victory could not have happened if I didn’t get that timely single to lead the inning off. Honestly, I knew the whole time that it was gonna happen. I believed in myself and it paid off and I know I’m the most clutch man alive,” Ayers said.

As the game ended, cheers and smiles were visible everywhere as the boys rallied together and turned a game that seemed like a tough loss into a huge win. Spirits soared and so did the boys as they rushed out of the dugout and piled onto Greene, who stood at first base with a grin on his face.

“When I was at-bat, I was telling myself not to pop out like I did last time. I just wanted to come in clutch for my team. Now it’s time to go get Panda Express, party, and study for my Spanish test,” Greene said.

The Scots’ next game is on March 3 as they take on the Woodside Wildcats.