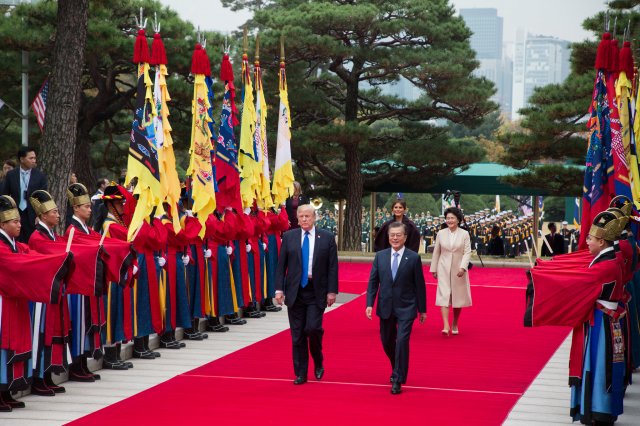 President Donald J. Trump and South Korean President Moon Jae-in, arrive at the Blue House in Seoul, South Korea on Nov. 7, 2017. Recent talks with Trump and Kim Jong-un have stalled, leaving both sides with nothing.

North Korea tests a new weapon
According to a report from the country’s state media, North Korean leader Kim Jong-un inspected and directed a “new tactical guided weapons firing test” on Wednesday. The report did not state what type of weapon was tested or its range.

According to U.S. Department of Defense officials, U.S. Northern Command and Strategic Command did not detect a missile launch.

“The development and completion of this weapons system will be a great historic event in strengthening the combat capability of the People’s Army,” Jong-un said, according to the Korean Central News Agency.

After the launch of an intercontinental ballistic missile in November 2017, North Korea declared a moratorium on nuclear weapons and long-range missile tests. This test also comes after talks in Hanoi, Vietnam dissolved, putting leaders of both countries at a stalemate.
President Trump prolongs US involvement in Yemeni Civil War

President Donald Trump has vetoed a congressional resolution on Tuesday that would have sought to end U.S. involvement in the Saudi-led war in Yemen. This is his second veto since taking office, leaving Congress to either accept his veto or override it.

The bill passed the House 247-175 backed by the Democrats and 16 Republicans. In the Senate, the vote was 54-46, with seven Republicans voting with Democrats.

“This resolution is an unnecessary, dangerous attempt to weaken my constitutional authorities, endangering the lives of American citizens and brave service members, both today and in the future,” Trump wrote to the Senate Tuesday.

His veto was expected, as the resolution was seen as a rebuke to his Middle East policy.

“This conflict must end, now. The House of Representatives calls on the president to put peace before politics, and work with us to advance an enduring solution to end this crisis and save lives,” said Speaker of the House Nancy Pelosi, in her statement on Tuesday night.
Mueller Report is released
After a long wait, the report from special counsel Robert Mueller was delivered to Congress on Thursday morning. The report was heavily redacted, and neither exonerated the president nor charged him of any crime.

Mueller examined 10 actions by President Donald Trump to determine whether he sought to obstruct justice but could not reach a conclusion. He established no criminal conspiracy between Trump’s campaign and Russia, despite finding a concerted effort by Russia to interfere in the 2016 election.

Many politicians, including Speaker of the House Nancy Pelosi and Rep. Jerry Nadler, the chairman of the House Judiciary Committee, believe that Mueller should testify before Congress and are calling on him to do so.