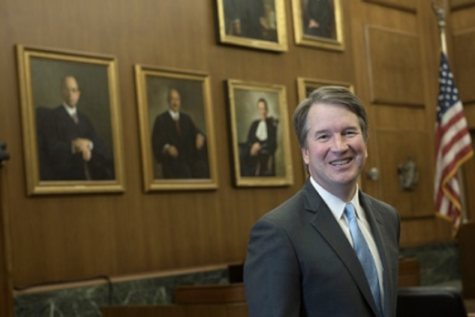 Brett Kavanaugh poses for a picture. Kavanaugh was recently accused of sexual misconduct and harassment.

Brett Kavanaugh’s judiciary confirmation hearings come to a halt
Brett Kavanaugh’s judiciary confirmation hearings have generated controversy as Kavanaugh has been accused of sexual misconduct. The alleged victim Christine Blasey Ford, 51, claims that during a party in 1982, Kavanaugh and his friend pinned her down and groped her. Ford claims both her and Kavanaugh were inebriated during the alleged encounter.

Initially, Ford made the allegation in a letter to Senate Democrats. Ford went public with the allegation in a story to the Washington Post. Some have been swift to criticize Ford’s allegations since she went public during his confirmation hearings to the United States Supreme Court but Ford released her therapy records showing that she talked about the alleged assault during couples therapy in 2012, according to the Washington Post.

Kavanaugh has continued to unequivocally deny the allegations. In an exclusive interview with Fox News on Sept. 24, Kavanaugh said the allegations could not be true due to the fact that he was a virgin when the alleged assault took place.
From comedian to an inmate: Bill Cosby is now known as inmate NN7687
Bill Cosby, once a beloved television dad and comedian, is going to prison.

After being convicted of three counts of aggravated indecent assault, Cosby had a maximum sentence of 30 years. But at his sentencing hearing on Sept. 24, the district attorney Kevin Steele agreed to merge the charges into one for sentencing purposes.

On Sept. 25, Cosby was sentenced to three to ten years in prison for his crimes. Cosby’s conviction is the first conviction in the #MeToo movement.

After the hearing was over, Cosby’s publicist read a statement claiming that both Cosby and Kavanaugh were victims of a “sex war that is going on in Washington today.”

Cosby showed no remorse for his actions and refused to apologize. His wife of 54 years, Camille Hanks, has stood by him during the trial.