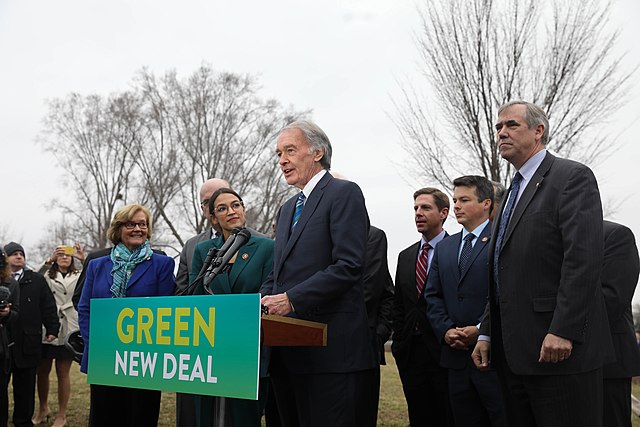 Rep. Alexandria Ocasio-Cortez and Sen. Ed Markey introduced the Green New Deal into Congress. Since its introduction, it has faced criticism from both sides of the aisle.

Mark Harris, the Republican candidate, had used political operatives to sway the race in his favor. This race now remains the only undecided House race from the 2018 midterm election.

Robert Cordle, the state board’s chairman, said, “It was certainly a tainted election.” Cordle cited “the corruption, the absolute mess with the absentee ballots” as reasons for a new election.

Harris originally denied any knowledge of wrongdoing in his hearing in front of the election board. Harris answered a series of questions before the board that was suspected to be misleading. After a recess in the hearing, Harris took the stand again and read a statement asking for a new election.

“It’s become clear to me that the public’s confidence in the 9th District’s general election has been undermined to an extent that a new election is warranted,” Harris said.


Green New Deal faces uncertainty
The Green New Deal is a congressional resolution that lays out a grand plan for tackling climate change, introduced by  Rep. Alexandria Ocasio-Cortez and Sen. Ed Markey. However, the resolution has been largely criticized for its economic costs.

Many congresspeople are reluctant to sign onto it because of the expansive new taxes and federal programs that would be required in order to put it into place.

The Green New Deal calls for a “10-year national mobilization” in order to make the United States carbon-neutral across the economy.

Some of the main criticisms of the resolution are that it is too far-reaching and does not focus enough on issues directly relating to reducing carbon emissions.

“It is difficult to support the resolution right now when one of the lead sponsors says one of the intentions is to make air travel unnecessary,” Rep. Rick Larsen, a Democrat and chairman of the House Transportation and Infrastructure Subcommittee on Aviation, said in a statement in early February.

Many 2020 presidential candidates, such as Sens. Cory Booker, Kirsten Gillibrand, Elizabeth Warren, Bernie Sanders, and Amy Klobuchar have all voiced their support for the Green New Deal, as well as co-sponsored the resolution.
R. Kelly pleads not guilty to abuse charges
R. Kelly, the rhythm and blues singer, pleaded not guilty to ten counts of aggravated criminal sexual abuse.

He was indicted last Friday in Cook County, Ill. At the time of the alleged incidents, three of the victims were under the age of 17. Prosecutors say these incidents span from 1998 to 2010. Kelly was held on $1 million bond and was released on Monday evening after posting his $100,000 bail.

While speaking to reporters, Steven Greenberg, Kelly’s attorney, said: “I think all the women are lying, yes. This has become, ‘Hey I can say R. Kelly did something, boom.'”

Kelly has been accused several times in the past of abusing underage girls, resulting in settlements with nondisclosure agreements that protected him for many years. Many allegations against Kelly were brought to light last month in the documentary “Surviving R. Kelly,” where prosecutors tried to build another case against him.

After Kelly was ordered to be held on bond, he also had to surrender his passport and was told not to have contact with anyone under the age of 18 or any of the alleged victims.