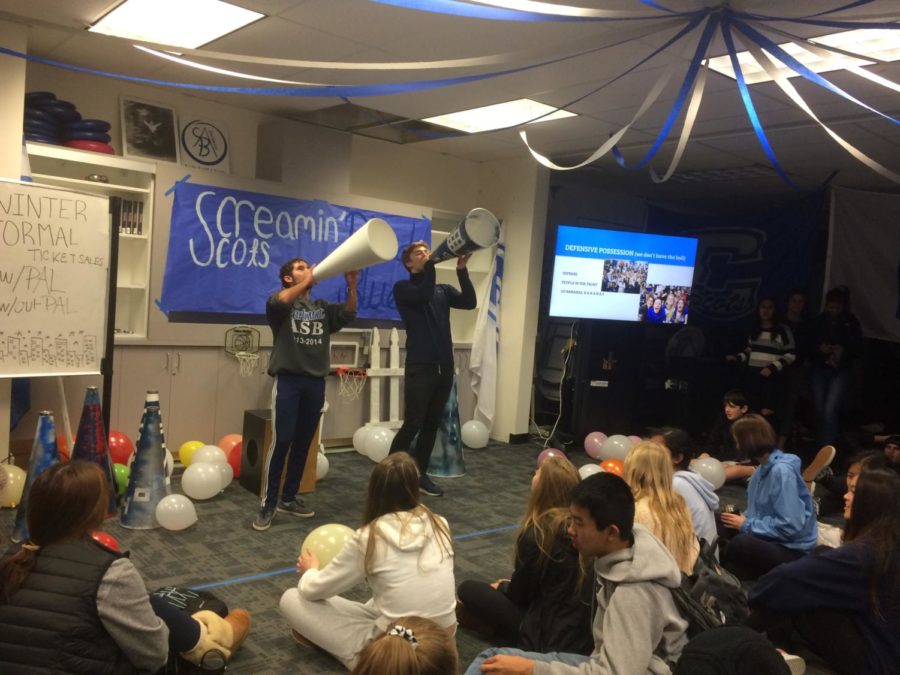 Kyle Dimick, a senior, and Griffin Soelberg, a junior, lead students through cheers.

The event took place during lunch and was originally planned to be on Jan. 16. However, the date was later changed.

Screamin’ Scots is a student-run organization that cheers on Carlmont sports teams. It is categorized under the Spirit Hype category in the ASB chart.

During the meeting, Kyle Dimick, a senior and longtime leader of the Screamin’ Scots, with the help of Griffin Soelberg, a junior, led students through some cheers.

The Screamin’ Scots team spent about two weeks preparing for the meeting.

Dimick said: “We’ve been planning the decorations for about a week now. We have one week [for] just making up new cheers and figuring out how the meeting is going to flow and then another two days for decorating.”

The team had a lot to do to prepare for the meeting.

“First, we have to come up with some cheers. Then we have [to have] the streamers hanging down from the ceiling,” Dimick said. “We’ve got our flags [and] all of the decorations.”

The preparations for the meeting weren’t difficult, but they were time-consuming.

“Being the Screamin’ Scots leader for so long, I know a lot of the cheers. It’s always easy to just go over them again,” Dimick said. “It’s just doing everything at once is hard.”

Although preparations may seem like a lot of work, the Screamin Scots team still enjoyed doing them.

The students who went to the spirit meeting appreciated all the work that the Screamin’ Scots team put in.

Juliana Rinaldi, a senior, said, “I liked how everyone came and [how] everyone participated.”

The Screamin’ Scots team has been thrilled with their success in getting students out to the games, and they hope for even more participation in the future.

“I’m really proud of how well our Screamin’ Scots has been doing this year. I think this year, we’ve had a great turnout at every game,” Dimick said. “I’m also just really proud of the fact that we’re able to get so many people in here at lunch [for the meeting].”