Season recap: the ups and downs of JV girls volleyball 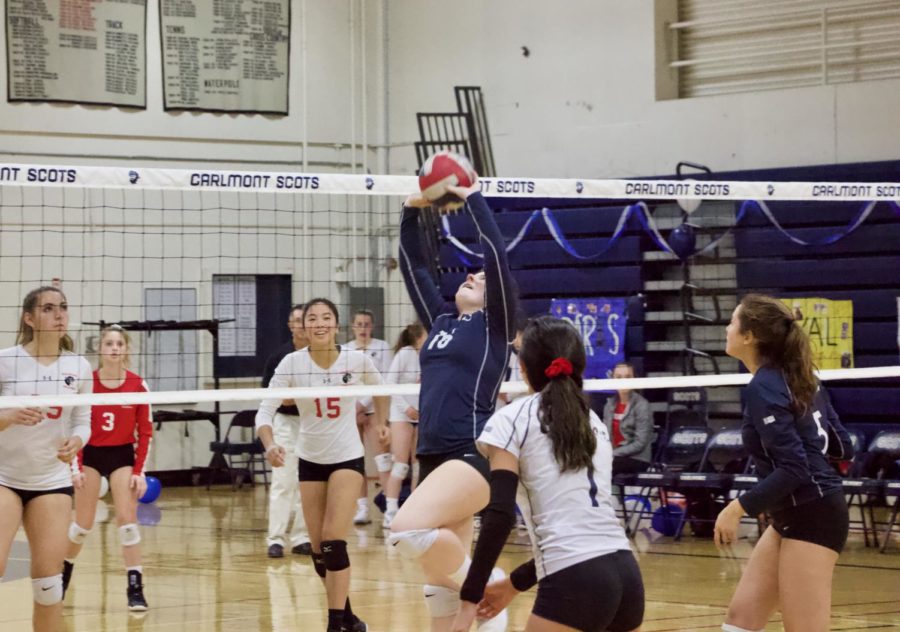 Nicole Yaravoy, a sophomore, sets the ball back to the opposing team.

Rebecca Acker, a junior, attacks the ball, scoring the last point of the season. The JV girls volleyball team huddles in the center of the court as they cheer “good game” for the very last time of the season — a season that was filled with many ups and downs.

The team started the season by winning the first two games. However, their perfect season was cut short when it came time to play Menlo-Atherton. Although the team battled hard, it eventually lost in an intense three-set match. From then on, the Scots set their mind to redeem themselves and eventually defeated the Bears during the second half of the season.

After the victory, the Scots were ranked first in the league. However, this title wouldn’t last long. The Scots followed up their outstanding victory against the Bears with two consecutive losses against San Mateo and Woodside. The team treated the win against Menlo-Atherton like it was the last game of the season.

“This happened because we got too confident with ourselves and became too relaxed,” said Nicole Yaravoy, a sophomore.

Crushing Menlo-Atherton resulted in the Scots becoming a bit too confident in their abilities. With that, they weren’t able to work as a team.

“They lacked a cohesiveness. I think with playing time, maybe some of the kids got a little selfish here and there,” said coach Irene Oliveira.

With the team’s first-place ranking along with their winning streak both on the line, it was clear the team was playing timid through the middle part of the season.

“During the [San Mateo and Woodside] games, we were all afraid to mess up. We knew that if we lost, we would lose the title of being first,” said Chianti Raddavero, a freshman.

However, these games weren’t the only thing the team lost throughout the season.

Halfway through the season, former coach Vern Leslie was fired. This news left the team in shock.

“Even though it was a shock, I felt it coming for a little bit because a lot of the team did not like him,” said Sasha Belov, a sophomore.

However, a new coach was also a chance to start over. Many of the team members wondered if the team would be impacted positively or negatively.

“I was excited that he was gone, but I was nervous about what would happen to our team without a set coach,” said Rebecca Acker, a junior.

Despite the coaching situation, the team still managed to win two games without a head coach. During these two games, varsity coach Michael Lapuz coached the team. Meanwhile, the school worked on finding a new coach.

Oliveira had previous coaching experience, including coaching Carlmont’s previous volleyball and basketball teams. Her experience made her an ideal candidate for the job, so she decided to take the job.

“The coach got fired with a month left in the season, and I just felt like they deserved to have somebody that they can count on,” Oliveira said.

When Oliveira was first announced as the team’s new coach, many of the team members were hesitant mainly because the team was unaware of her background in volleyball and coaching.

“All I knew was that she was a P.E. teacher,” Raddavero said.

As the season progressed, the team realized Oliveira was a considerable benefactor to the team.

“It was really hard with our old coach kind of just giving up on us, but now we have coach Oliveira,a whole new motivation,” Johnson said.

Oliveira not only motivated the team but also knew how to push the team to their full potential mentally and physically.

“She really pushes us to our hardest and has us do a lot of important drills, and she talks a lot about the mental aspect of the game, which helps a lot of our players because many of our players have a lot of good skills, and a lot of us lack confidence,” Belov said.

Overall, Carlmont’s girls JV volleyball team ended with winning 11 out of their 14 games.

“I am gonna miss the energy and the way we work together and how we complete one another on and off the court,” said Joslyn Moore, a sophomore.