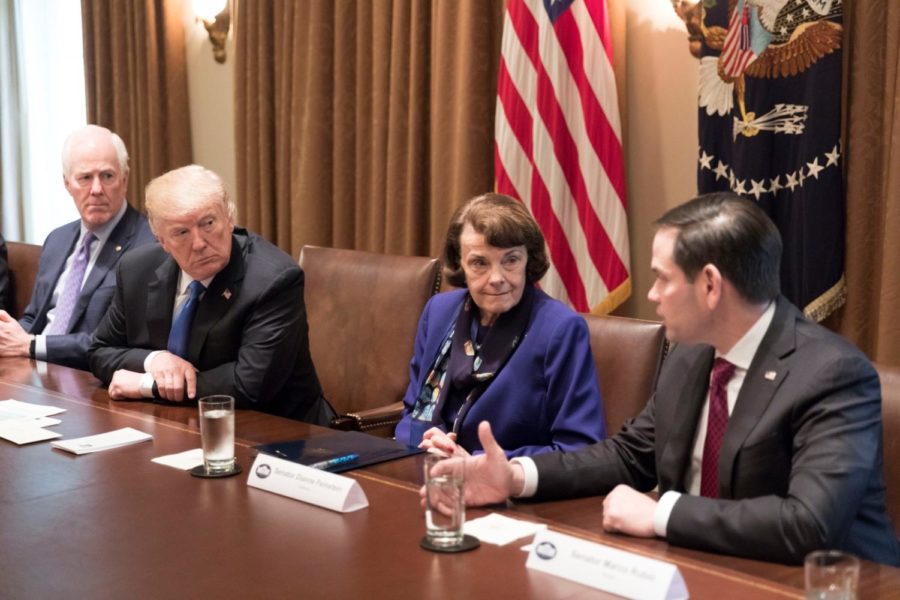 Senator Diane Feinstein meets with Donald Trump to discuss gun control, one of the issues she is most outspoken about. While she supports items such as gun control, she often is more centrist than some of her Democratic colleagues.

U.S. Senator Dianne Feinstein is seeking re-election to her fifth term in the U.S. Senate, but this time, she lacks the support of the California Democratic Party.

“California Democrats are hungry for new leadership that will fight for California values from the front lines, not equivocate on the sidelines. We all deserve a leader who will take our climate action to Washington and will fight each and every day to protect our human and civil rights, our immigrant families and Dreamers, champion universal healthcare and create good-paying middle-class jobs,” de León said in a statement.

Feinstein leans less to the left than de León and many other Democrats. When she ran for governor in 1990, she failed to receive the endorsement of the party due to her support of the death penalty. However, she has had the support of the party for every election in the past twenty-five years. In addition, her seniority is encouraging for some.

“She has so much seniority, it’s hard to give that up,” Cathy Jorgensen, a delegate from the Central Valley said, in an interview with The Associated Press.

Having the endorsement of the party gives a candidate both credibility and extra money. According to The Washington Post, Feinstein had more than $9.8 million in campaign funds at the start of the year, while de Leon had $359,261.

“[De León] was such a narrow path to the Senate, and he had to have this Democratic Party endorsement. This was the one strategic thing he needed to accomplish here and he did not accomplish it,” Democratic campaign strategist Katie Merrill said to NPR.

In the past, Feinstein has not had many strong opponents running against her, and her record in the Senate has a strong history of her fighting for gun control and sexual assault issues.

Americans will take to the polls this November as all 435 house seats are up for re-election as well as 34 Senate seats.