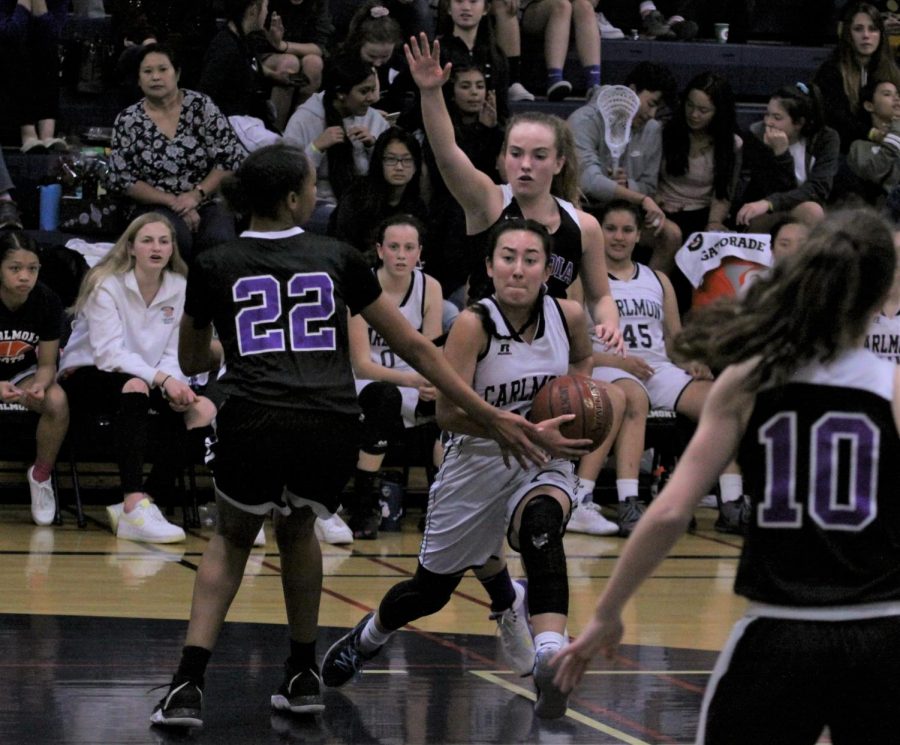 Erica Mendiola, a senior, moves past Sequoia defenders on her way to the basket.

The Carlmont girls varsity basketball team lost to Sequoia 46-33 in their final game of the regular season.

The Scots got off to a quick start, putting up 12 points in the first quarter to Sequoia’s eight, several of them 3-pointers from Erica Mendiola, a senior, who had seven 3-pointers in the game.

Though Carlmont was in the lead at the beginning of the second half, Sequoia pulled ahead, blocking Carlmont’s passes and pressuring their defense to win by 13 points. Despite the loss, the main story of the night wasn’t the score but rather the seniors on the court.

“They gave their heart and soul out there,” said Dan Mori, the team’s head coach. “They played with such intensity and passion.”

For six players, this game marked the end of their Carlmont career. Graduating seniors Chloe Palarca-Wong, Mendiola, Gaby Pierce, Ava Bruckner-Kockel, Sam Lombardi, and Gaby Goldman were honored before the game with a ceremony. Each player, accompanied by their family, walked under an arch of balloons to receive roses and a plaque. The announcer listed their intended college major and favorite things about Carlmont basketball, many of which included “cheering so hard I lose my voice.”

“It’s a super huge deal [for the seniors],” said Jim Kelly, the Associated Student Body (ASB) director and Carlmont swim coach. “Before you know it, you’re a senior, and then all of a sudden, it’s over. [Tonight] is massive for them.”

The seniors laughed and cried as they accepted their roses and posed with their family and friends.

“It was very emotional, very intense,” Mendiola said. “I actually cried while I was walking [through the arch].”

Many of the other girls agreed.

“I’ve been with these girls for so long. It’s crazy; it feels like yesterday I was being yelled at by our freshman coaches. I love these people. They’re my family,” Palarca-Wong said.

Though the game took place on Valentine’s Day, a devoted crowd still showed up to cheer on the team. ASB encouraged students to wear pink, and the Screamin’ Scots, cheerleaders, and dance team crowded into the stands for the boys varsity game later that night. Friends and family held handmade signs or cardboard cutouts of players’ faces.

Fortunately for Carlmont fans, the season isn’t quite finished; the team has qualified for CCS and will be competing in the tournament later this month.

“Though half of [the sport] is physical, a lot of it is mental as well,” Palarca-Wong said. “We pick each other up really well, and we have a good mentality, so that’s one thing I want to keep seeing [in CCS].”

Mori believes that the team has what it takes to succeed in CCS.

“If we play with that same intensity and passion, I think we’ll do very well,” Mouri said.