Seniors are honored at the Homecoming game 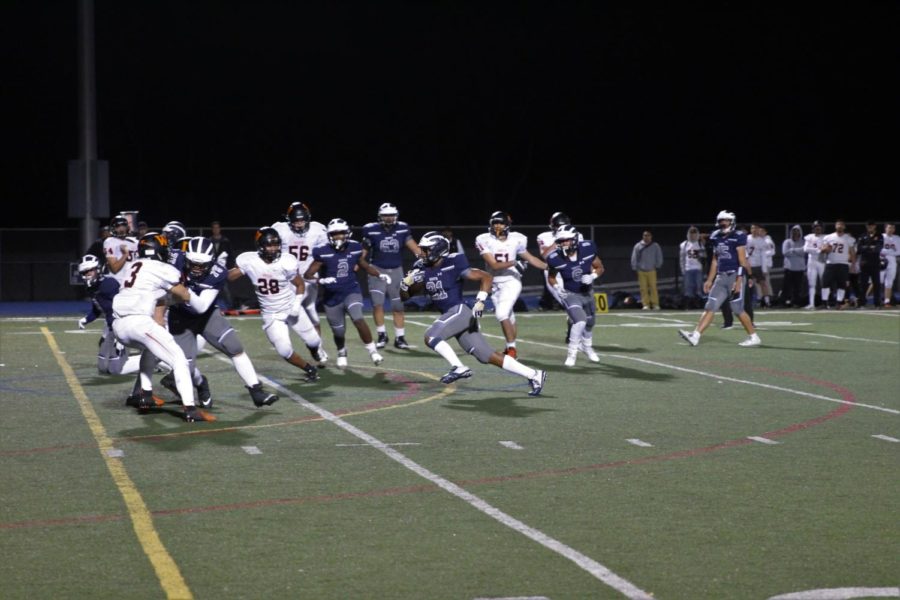 Jayden Kuhn, a senior, runs the ball through the Wildcat defense.

As the night came to a close, the Carlmont Scots beat the Woodside Wildcats by 41-6 in the largest victory the football team had seen all year.

This night, however, wasn’t just about the game. Before the first whistle blew, both the Scots’ football team and varsity cheer team had their seniors honored for their hard work and dedication towards their respective squads.

“I felt a lot of emotions all at once, to be honest. I was excited but also sad because it indicates new beginnings but also the end of an era. I’ve been cheering for 10 years, this one is my 11th, and it makes me realize how important this sport has been to my life,” said Sophia Mercado, a senior on varsity cheer.

After the ceremony, the seniors on both the cheer and football team had the chance to have one more night performing at the school that, for most of them, they had spent four years attending.

The Scots took their excitement and pushed it into game time, making quick work of the Wildcat’s defense and scoring at the 10:26 mark with a touchdown from Julian Morin, a senior. Another touchdown, this time by the helping hand of Miles Taye, also a senior, allowed Carlmont to take an early 13-0 lead against Woodside.

The second quarter saw the Wildcats finally cross the goal line, but this would be their only time doing so the whole night. The Scots put up another seven points this quarter on an 80-yard run by Morin, increasing Carlmont’s lead and pushing the score to 20-6 at the half.

The half gave way to the Homecoming Parade, in which every class displayed a float that had been created throughout the past week. As the seniors came around, many felt emotional as it would be their last time participating in the event.

“As a senior, being able to get hyped for the last time during the homecoming game was fun. It really puts your last year into perspective,” said Isabelle Bruguera, a senior.

A touchdown by Jonaven Kuhn, a junior, plus a successful field goal kick by Nico Franchi, a senior, increased the Scots’ lead to 27-6.

In the final quarter, another touchdown from Morin, although this time on an 87-yard run, and from Kuhn would allow the Scots to take the win over the Woodside Wildcats with the final score being 41-6.

“Winning on Senior Night and in our last home game was a real treat. Granted we had made it into the playoffs, it was also nice to take homecoming and beat a team that had habitually beat us in the past. Since I’m nearing the end of my football career, every victory feels great,” said Darian Dennler, a senior and linebacker for the Scots.

Morin would rush for 248 yards on the night, pushing his total yardage on the year to 1,142 yards.

“We’ve practiced for every opponent by working hard and minimizing our mistakes as much as possible,” said Gregory Crame, a senior and wide receiver.