Seniors gear up for college day 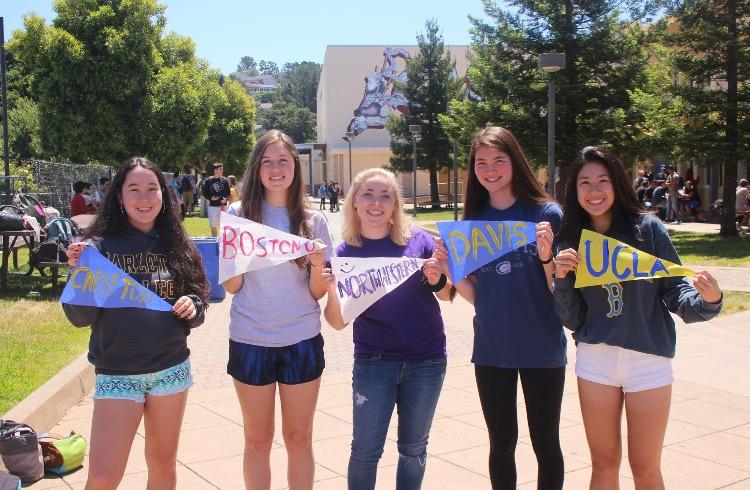 As acceptance letters roll in, students begin to share what schools they will be attending in the fall.

For Carlmont seniors, one of the most highly anticipated spirit days is college gear day.

On May 22, ASB held college gear day to kick off the final spirit week of the year.

Although this day excited many, some seniors felt like the spirit day could have some downsides.

For those who won’t be attending prestigious four-year universities or have other plans for after graduation, college day may have felt like it didn’t pertain to them.

“I think some seniors might’ve felt left out or uncomfortable when they had to wear college gear,” said Ashley Herrero, a senior. “I didn’t wear anything because I’m going to Cañada College, and personally I didn’t feel like it was worth showing compared to some other schools my classmates will be attending.”

In order to include everyone in the spirit day, ASB planned Scot’s day on May 22 as well.

“I think having it be Scot’s day on the same day is good because if you feel uncomfortable wearing college gear, then you can just show Carlmont pride,” said Herrero.

Furthermore, ASB shifted the focus of the day away from just colleges by including other options for seniors, like showing support for their jobs.

“I don’t think students need to feel embarrassed by what college they’re going to or what they’re doing after high school,” said Zia Flaminio, a senior. “I think that the day isn’t meant to put others down, and you don’t have to wear college gear. For example, you can just wear a shirt of the job you’ll have after graduation.”

Despite the mixed emotions about this day, for a lot of students, this was a way to show that their hard work over the past four years has paid off.

“I wore my college gear because I will be attending UC Berkeley in the fall, and I’m proud of myself for getting into that school,” said Evelyn Laurence, a senior. “It’s not that I was showing off, I just wanted to participate in the spirit day.”

Although some students wore college gear and others wore Scot’s gear, they all showed school spirit and many viewed the spirit day as a success.

“Overall, I think that college gear day was a great way for everyone to show off their school pride, whether that school is Carlmont or a university,” said Herrero.