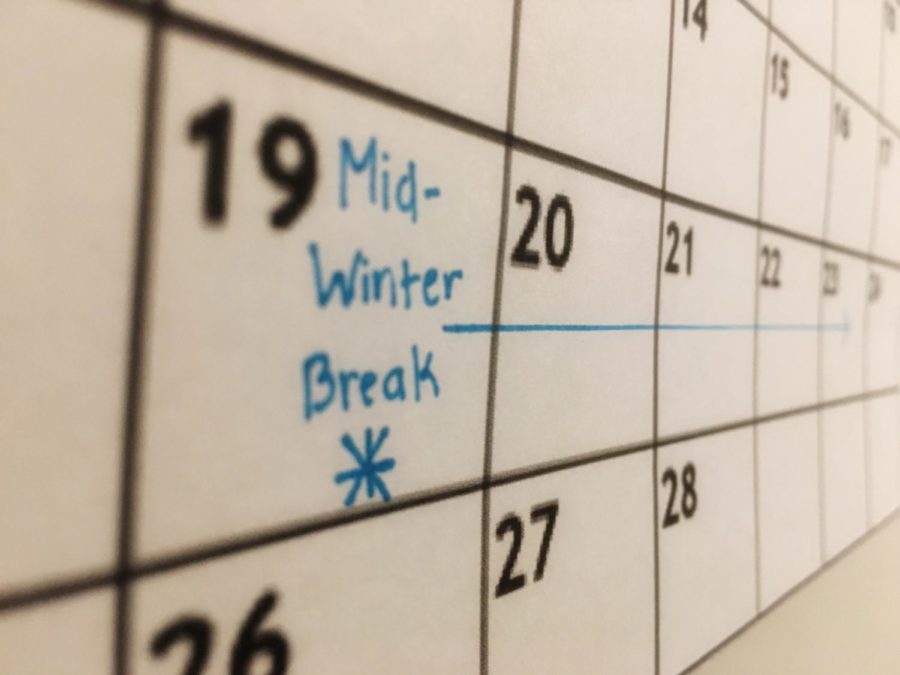 Mid-Winter Break was added to the Sequoia Union High School District schedule this year in place of Presidents' Weekend.

It is a well-known fact that everyone needs a break now and then, whether it’s taking time off from a sport, work, or in this case, school. As some may have noticed, the traditional four-day Presidents’ weekend is now a whole week off. This week is referred to as Mid-Winter Break.

For those confused by the unfamiliar name, Mid-Winter Break is better known as Ski Week. However, according to Edith Salvatore, President of the Sequoia District Teachers Association (SDTA), the idea of calling it ski week was inadequate as many students would not be skiing during that time. The association, therefore, settled on “Mid-Winter Break,” the name used back in the early 2000s, the last time students had that week off of school.

“The calendar process begins with the SDTA initiating a first round of surveys asking teachers what they would like to see in a school calendar, usually a year or two in advance. SDTA proposes several calendars, using teacher feedback from the surveys. Teachers again give a second round of feedback about the proposed calendars,” said Hai Nguyen, an SDTA representative for Carlmont. “The proposed calendars are then sent to the associate superintendents and superintendent, who discuss the proposed calendar with the district principals and school board. A final calendar is then selected and approved by the school board and district management.”

Essentially, the SDTA was given two options in order to fulfill the required 180 school days: keep the four-day weekend, or start school a bit earlier and have a whole week off, starting Feb. 17.

“The teachers and district agreed upon the second option, which gives students more time off to de-stress and be with family,” Nguyen said.

Liz Jolls, a parent with two kids straddled between San Carlos and Sequoia Union School Districts, agrees that the break in very beneficial. In previous years, her older daughter only had four days off while her younger daughter had the week, making it difficult to travel.

“[Mid-Winter Break] makes it easier for us to plan a trip… Most people prefer to travel or have time with their whole family. I’m glad we now get to do that as well… It keeps the family together,” said Jolls.

As president of the SDTA, Salvatore also pointed out that when feeder districts take the week off and SUHSD does not, it makes it difficult for families who depend on their older children for childcare. Mid-Winter Break was, therefore, the best solution to all concerns.

Besides aligning with feeder schools, SDTA took a few more factors into account when deciding the 2017-2018 calendar.

According to the feedback from teacher surveys, many preferred to start the work year on a Monday in August, meaning school for students would start on a Wednesday. In order to meet these requests and still fit in finals before winter break, the start of the teacher work year had to be moved to early August, ranging between Aug 13 and 17 every year, and no sooner.

“Our survey of members showed a strong resistance to moving the start of the school year any earlier in August, especially due to the disparity of air conditioning in classrooms and the excessive heat many of our communities experience in the month of August,” Salvatore said.

With the masses appeased, the calendar was approved, resulting in a new schedule and Mid-Winter Break.

“Though we haven’t yet experienced this year’s Mid-Winter Break, and would have liked to before committing to another calendar, there was a need to commit to a 2018-2019 calendar for everyone’s long-term planning, and our members overwhelmingly supported including mid-winter break for that year as well,” Salvatore said.

And so, the future is set. All one must do now is wait and see what it brings.