Free education and benefits come at a cost 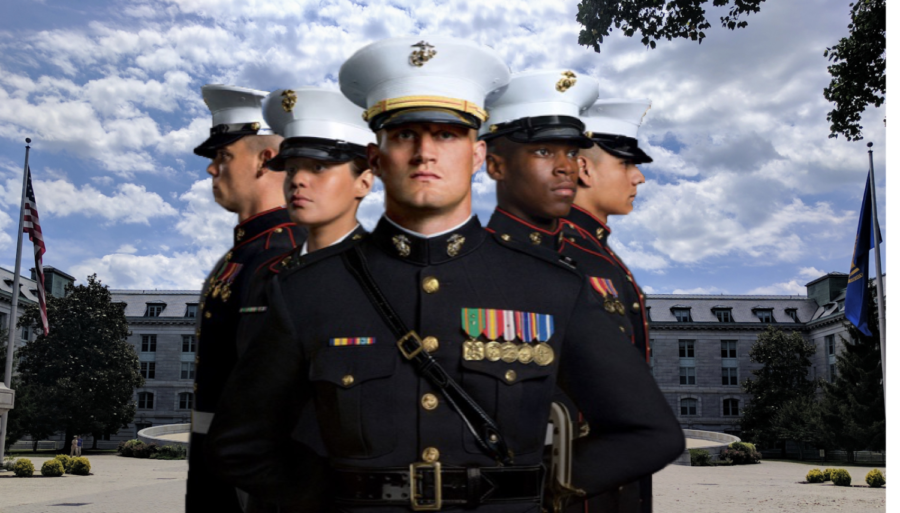 Active US Marines stand in front of the US Naval Academy.

Khan is sitting in his counselor’s office, flipping through a U.S. News and World Report college edition magazine. Colleges such as Berkeley, Stanford, Yale, and USC fill his head. Not only does Khan wonder whether he can get in, but how he will to pay the tuition. Khan flips through the rankings until the service academies catch his eye.

The service academies provide a free world-class education, free housing, and a guaranteed job or career upon graduation. They all offer a large variety of degrees from English and economics to computer science and engineering. Additionally, all degrees are accredited and attendees graduate after four years of school with a Bachelors of Science or Bachelors of Art degree in their major.

Upon getting into the school, each student gets a series of paychecks starting the summer before their freshman year which will pay for their four years of education.

When one finishes their four years of school, not only do they graduate with a degree from one of the top schools in the nation, but they also become an active-duty military officer in their respective school’s service branch.

There’s only one catch; that degree may cost them their life.

Each graduate must serve a minimum of five years of active duty. Some areas, such as pilot training, require even longer devotions. While on active duty, if the United States is in a military conflict, such as in Afghanistan, they  may be deployed, and may not come back.

As a graduate of the U.S. Naval Academy, Karin Vernazza, who served 32 years in the Navy and rose to the rank of captain, believes that the risk is worthwhile.

“I was willing to give up my life in defense of my country and was very proud to do that. The goal is to stay alive and win wars, and defend our Constitution and freedom,” Vernazza said. “It is definitely worth the risk. We need our best, brightest, strongest, and toughest defending our nation.”

Vernazza explains further, expanding on the impact it has had on her life.

“The Navy was, and is, my life. It gave me opportunities, education, adventures, and friendships far beyond my dreams. I traveled around the world many times over and met many influential leaders who tried to make the world a better place,” Vernazza said.

Vernazza entered the U.S. Naval Academy in 1986 when the female combat exclusion law was in full effect, preventing women from holding certain jobs or joining certain divisions like the submarines and Navy Seals. In addition to the female combat exclusion, Public Law 94-106 also capped the number of women accepted to the Academies at 10%, making women the minority in a predominantly male school.

“The culture [at the Naval Academy] was very ‘survival of the fittest,’ attrition-based, and it didn’t support women,” Vernazza said. “The female combat exclusion law also didn’t help matters for fair opportunities to serve upon graduation.”

This law is no longer in place, removing the cap on women’s acceptance. Today, women make up 25% on average at all the service academies, with the Coast Guard Academy having the highest percentage of 36%.

Applications to the academies for women and men are the same, though the physical fitness test differs slightly. To apply to all but the Coast Guard Academy, one needs to pass a physical fitness test and medical exam and gain a congressional nomination on top of meeting the academic qualifications. The average dropout rate ranges anywhere from 15% to upwards of 30% depending on the year, making the service academies some of the most competitive schools in the country.

Heikki Laukkanen, a graduate from the Merchant Marine Academy, is currently serving in the Coast Guard as a reserve commander. He has served a total of 27 years.

“I’m not going to lie, it was not the best time for me. It was a challenging four years, but at the same time, it made me a better, stronger person. It made coping with life’s challenges afterward a lot easier because you’ve already faced significant challenges as a younger person, and you have leadership skills,” Laukkanen said.

“Going to the Merchant Marine Academy, in particular, gives you so many career options; you’re not locked into one service,” Laukkanen said. “There are so many things you can do in the maritime field.”

When Laukkanen was in high school, he wanted to be a ship’s captain which helped him ultimately decided to attend the Merchant Marine Academy.

“It’s specifically designed to teach deck officers and if you want to be the pilot of a ship, that is, you know, a round peg in a round hole. It’s very specialized for that deal,” Laukkanen said.

For both Leukkamen and Vernazza, the many months away from home and having to move every two to three years was difficult, but the ends ultimately justified the means.

“It was amazing, but it had its challenging times too with excessive stress, deployments, and family separations,” Vernazza said. “My family and I didn’t mind moving so much and, towards the end, we actually looked forward to it. It was very difficult to be a mother and career naval officer, but I wouldn’t trade it for anything.”

Many of the future members of service academies look forward to accepting the challenging academic and physical environment that the academies provide.

One must be mentally and physically prepared to attend a service academy. It’s a job of immense risk, yet simultaneously, tremendous reward. Shuaib Khan, a senior, plans to apply to the Air Force Academy later this year.