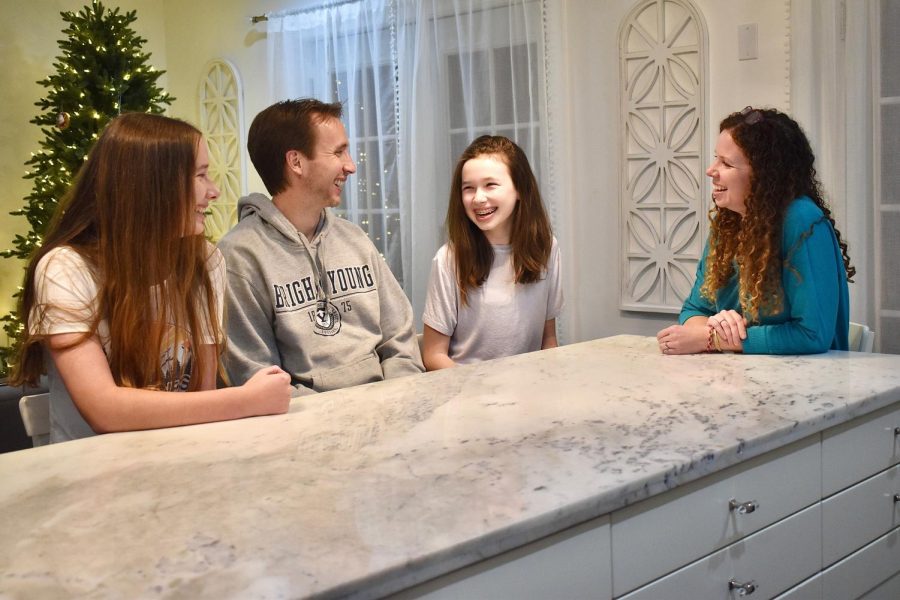 Parents and teens can get along in various ways. Sadie North, a senior, spends time with her parents and younger sister.

These adjectives describe the stereotypical teenager who is indifferent to their parents. However, studies show that many teenagers who do not have a healthy relationship with their parents are at a significant disadvantage for the future.

Actions as small as not eating with your family can have a significant effect. According to Teens and Their Parents in the 21st Century: An Examination of Trends in Teen Behavior and the Role of Parental Involvement, teenagers ages 15 to 16 who do not eat dinner with their parents five times a week are nearly 10% more likely to drink every month. The study also found that the number of times a teenager eats with their parents connects to drugs, sex, violence, and academic performance.

Pamela Levy, a marriage and family therapist, said, “We all need the support of our family. Children need their parents, and parents really need their children. It’s a loving, caring relationship, but for children, it’s super important because it’s a template for all of their relationships going forward.”

Studies echo the long-term effects. According to Parent-Teen Relationships and Interactions: Far More Positive Than Not, good parent-teen relationships are linked to lower long-term psychological distress in children and parents. They also found that children in positive relationships with their parents typically have higher self-esteem, happiness, and life satisfaction.

Furthermore, Levy said that sometimes parent’s relationships with their parents could affect their current relationship.

“I do enjoy spending time with my parents. But now, as a teenager, I feel like I want to spend time with my friends too,” said Erica Tam, a sophomore.

Previous studies have expressed similar data. According to the previous study, teenagers’ positive relationships with their parents decline in their teenage years.

“I have seen teenagers doing what they are supposed to do, to get to the next phase of their life, which is adulthood. And that is separating and individuating. For that to occur, there has to be conflict,” said Shelley Bustamante, a Carlmont counselor.

Bustamante and Levy both stressed the importance of the individuation phase, where teens learn to become their own person. Developing Individuation in Adolescence says that the individuation process happens throughout one’s life, especially during the adolescent years.

“Sometimes, parents misinterpret that [individuality] as rebellion or disrespect, and the relationship can be harmed at that point,” Levy said.

An internet survey by a bestselling author polled 1,843 teenagers about relationships with their parents. They found that 91% of teens were lying to their parents about suicidal thoughts, sex, or drugs.

Bustamante said, “I’ve had many examples of that with students, maybe not always out, blatant lying, but the omission of truth or being a little bit of a spin doctor on what’s really going on.”

According to Levy, a reason for the disconnect is the teenager feeling unable to communicate.

“Their parents are not always going to understand them, and sometimes teens can’t communicate what they’re feeling or what they’re going through. And so there is that disconnect between parents and children,” Levy said. “I think that’s very hard for both parents and teens when they don’t feel like they’re understood.”

Bustamante has a similar sentiment, saying that sometimes teens are hesitant about confiding in their parents.

Bustamante said, “They don’t want to cause more anxiety, or they want to avoid the parent getting too reactive from what the child is saying.”

However, in the same internet survey, 78% of teens agreed that they felt loved and supported by their parents.

Then, in Youth Statistics: Family Structures and Relationships, 82% of boys and 76% of girls value their parents’ opinions over their peers’ opinions.

Tam said, “In the back of my head, whenever I make a decision, I think, would my parents approve of this? And I think it’s a good conscience that keeps me in line.”

Additionally, Parent-Teen Relationships and Interactions: Far More Positive Than Not reported that teenagers ages 14-18 who have parental involvement are estimated to have higher grades and academic expectations.

They also found that teenagers with positive parental relationships were less likely to engage in violent activity.