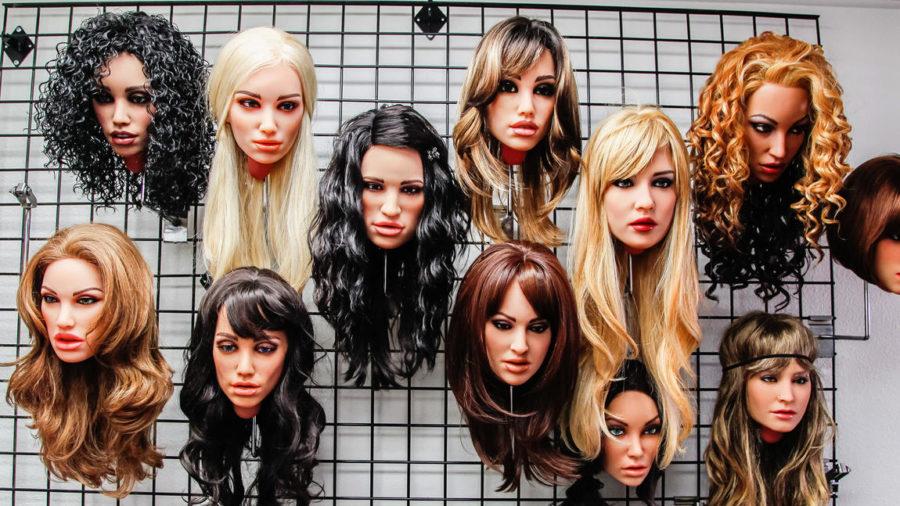 RealDoll heads, which will soon be transformed into full robots, on display in the showroom of Abyss Creations in San Marcos, California.

Imagine coming home to a woman that will never leave you, never turn you down for sexual desires, and never fight back against dominance.

Welcome to the world of female sex robots.

The sex industry is often an uncomfortable subject that isn’t widely discussed—let alone those creepy silicone sex dolls so realistic they look human. Yet, a 2016 Tufts University study cited that more than two thirds of men would use a sex robot.

Women are now literally objects for men to own in their sexual fantasy pursuits.

The almost real-life features add to the experience too. Sometimes, they are even hard to distinguish from a real woman. The sex technology industry, which, according to Forbes, will be worth $50 billion by 2020, is producing women with features so close to reality that the only difference is that they are objects. Real women are not—supposedly.

“We can, however, use photographs of a person of your choice to select a face structure as similar as possible from our line of 16 standard female faces,” according to the website of RealDoll, a leading sex technology brand under the company Abyss Creations.

How would you feel if a girl turned down a boy, and then he went on to replicate her into a real-life doll just to sexually pleasure himself?

These companies cross the line by teaching men that they are given a fundamental right in which they are always entitled to a woman’s body for their own pleasures. They are given the opportunity to overpower a woman’s consented “No” and continue to fuel their cravings for dominance and violence.

In one paper, researchers suggested that when individuals considered at high risk of acting sexually aggressively are studied, levels of aggression are four times higher among frequent consumers of pornography.

Not only does the sex robot industry objectify women, it facilitates dangerous behaviors that are masked in a seemingly acceptable community.

For rapists and pedophiles, these robots gives them a mere outlet to fulfill their overwhelming sexual desires rather than learning to control their impulses. The mindset of “Well it’s better to rape robots than people” is flawed.

What does this say about our society? This notion suggest that men have such an innate drive to act sexually violent towards women that they will never have the capability to control it, just redirect it into an inanimate object. In addition, this conception denigrates a majority of men, as well as victimizes women.

Society has failed to see sexual violence as a crime. These robots give an out to people who crave misogynistic fulfillment by normalizing sexual addiction in an unhealthy form.

Relationships are defined by emotional connections. Sure, there may be a physical attraction involved, but with sex robots, there’s merely an illusion of sentience.

In January, Abyss Creations will be revealing it’s newest technology: Harmony. She’s a sex robot with an animatronic talking head and a programmable personality and memory.

The creator of Harmony, Matt McMullen, has already developed lifelike sex dolls for over 20 years and has sold over 8,000 RealDolls across the globe. In addition, he has released Harmony AI, an app that allows users to personalize female avatars and have artificial intelligence powered conversation with them.

According to McMullen, thousands of Harmony AI apps have been purchased worldwide since it’s release in May, with some users even talking to their avatars for up to 10 hours a day.

Sex robots facilitate pure physical attraction, allowing an emotional high to arise when users can do whatever they please to them. It’s not at all a healthy relationship for a real human to be talking to an avatar, a mechanical entity, for up to 10 hours a day.

People who have troubles interacting normally need a deeper level of help, such as therapy—not robots. Because robots can’t evoke real feelings, humans shouldn’t develop genuine feelings for a machine either.

There is also a prominent theme of gender inequality in the world in which they are produced.

Society also tend to assign technology a gender based on our preconceived conceptions of that gender. Another company, TrueCompanion, has produced both Roxxxy, the world’s first female sex robot, and Rocky, a male sex robot. However, we can also see the discrepancies in gender equality through their characters.

According to Glamour, Douglas Hines, the founder of TrueCompanion, said, “Rocky is more talkative and less quick to want to ‘go to bed. Rocky is much more interested in talking to you, where Roxxxy is more focused on your physical needs.” Even in technology, the strong gender bias remains unchallenged.