Sexuality or gender is not an insult, so don’t make it one 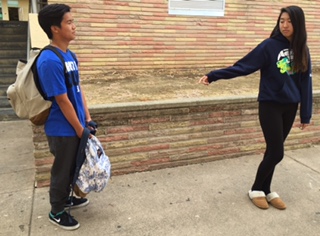 When most people hear the word whipped, they often think of the guy being controlled by the girl. However, it's never deemed wrong for the girl to be at her boyfriend's beck and call.

I hear those three words and I can’t help but cringe.

Those three words are, unfortunately, commonly used by one person to insult another.

Those three words are an insult because they are meant to indicate that if you’re gay then you are somehow less than a man.

According to BBC News, terms such as gay replaces the insult of calling someone “lame.”

A seemingly innocent phrase like, “you throw like a girl,” may sound like just a joke or a playful insult, but it carries the same meaning as saying, “you’re terrible at pitching.”

That phrase is meant to insult someone by telling them their athletic skills are the same as a girl, therefore degrading a girl’s athletic ability insinuating that there’s no way a girl can be as athletic as a guy.

Most wouldn’t think of comparing your throwing skills to one of a girl’s as a serious insult because the phrase seems childish and immature. But how are we supposed to grow out of this misogynist mindset if that’s how things were always viewed since elementary school, when this phrase was most commonly used?

Another word that is used between younger guys to insult each other, but is also unknowingly degrading women, is “whipped.”

According to Urban Dictionary, being whipped is for a man to be completely controlled by his girlfriend.

It will always be in society’s mindset for the man to be the dominant figure in any relationship, so when a woman holds some power over a man, it makes him look weak.

There’s no reason that a man should be insulted for not always being the controlling, dominant figure in the relationship, and women should not be afraid to be in control and hold some power.

If we can’t rise above old standards or double standards, then how can we say our society has evolved.