Sidelined: the psychological toll of a sports injury 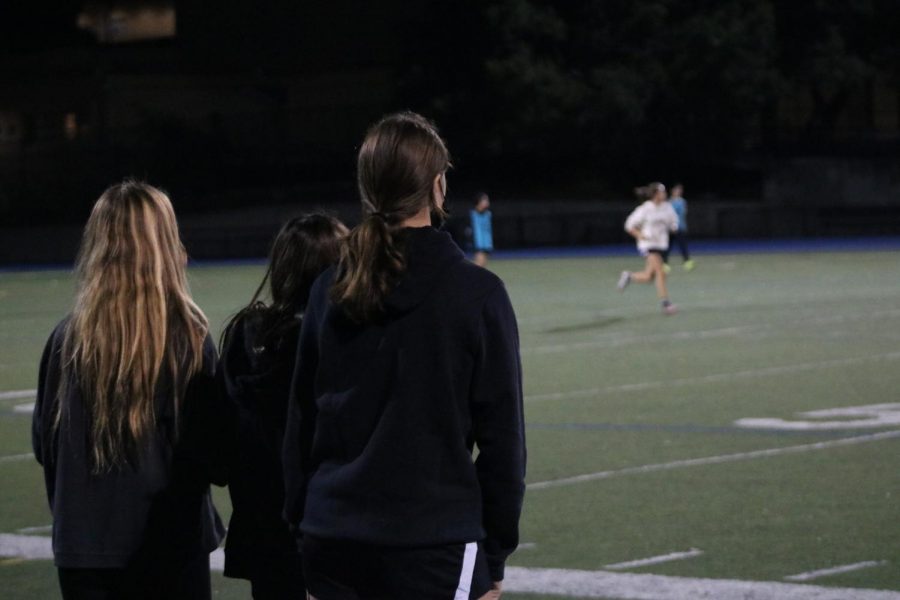 Injured players on the Carlmont JV girls soccer team watch their teammates practice from the sidelines.

Two games in, and his season was over. He was carted off the field, and the game continued without him.

When a player gets injured, a backup replaces them, and the season continues. However, thousands of athletes are suffering from injuries and trying to find hope off the field.

After suffering a fractured ankle in his third game as a Division 1 starting quarterback, 20-year-old Zaire faced a daunting task: recovery.

“It’s not like a bandaid situation. You can’t just tape your ankle or, you know, just patch something up. Your body got to go through what it has to go through naturally to get better,” Zaire said.

According to the Cleveland Clinic, ankle fractures can take anywhere between 12 and 16 weeks to heal, and with surgery up to two years. This recovery time was no match for Notre Dame’s 12-week regular season.

“You just know when you do it in that moment that you are done for the whole season. So knowing your season is done, but the season is still going on, it is just a different shock,” Zaire said.

As a collegiate athlete, he understood the importance of developing a positive outlook on recovery and looking forward instead of focusing on the past.

“It’s one of those things where, when you play sports for a long time at a level like that, you just develop a next play mentality. Like a 24-hour rule where you don’t dwell on things too long because everything in sports is ‘what have you done for me lately?'” Zaire said.

After getting injured, Zaire had to accept that he would be replaced as Notre Dame’s starting quarterback by Deshone Kizer.

Staying strong for his team was the next best thing.

“When you are the quarterback of the team, and you end up not being the quarterback of the team because of that [injury], it is just a different form of leadership,” Zaire said. “You have to develop a bunch of stuff and find out what you can do in the strength you have that you didn’t even know you had. I think it is a personal journey that you can only experience when you get hurt in certain situations and adverse times.”

Nearly all players will encounter similar roadblocks in their careers. Injuries are an unavoidable part of an athlete’s life, whether a sore muscle or a torn ACL. This has been the case for senior Victoria Gittoes, a varsity tennis player at Carlmont. Many times, Gittoes found herself injured and unable to compete.

In her high school tennis career, Gittoes has suffered a sprained ACL, a sprained MCL, muscle spasms, and breathing difficulties, all of which interrupted her playing.

She noted how the impact of these injuries went beyond just physical.

“Last year, when I sprained my ACL, that was a pretty big toll just because, [it is] like my outlet, it’s a chance for me to go outside to meet up with other people. So that is just a social aspect, and as an athlete, it’s also really difficult because I spend around 12 hours a week playing tennis,” Gittoes said. “Now I am just home doing nothing in my bed. I can’t even do anything, so mentally it was also tough.”

According to Andrew Haskell, MD, an orthopedic surgeon, and sports medicine specialist, ACL tears are common in football, basketball, and soccer.

“It is also a challenge and psychologically a challenge because we know it takes nine to 12 months to get them there. Early on, a lot of discussions about just, you know, trying to get people to that acceptance stage that they have a lot of work ahead of them,” Haskell said. “They have to understand that, you know, be mature and treat their bodies right and put in that work to get the best outcome and get back to where they need to be.”

Carlmont JV girls soccer player Carly Foehr got a mild concussion early in the soccer season when a teammate elbowed the left side of her head during practice.

“It’s honestly really hard for me to watch everybody play and not be able to be out there with them contributing to the team,” Foehr said.

However, the emotional toll of a sports injury is not reserved for just high school teams. The feeling only grows as the stakes get higher.

“Getting hurt is a lonely journey in sports because any day is really out of sight, out of mind type of business,” Zaire said. “So you can be the number one sports star in the world, but if you get hurt, in a couple of days, you may never be talked about.”

High school and college athletes alike yearn for the team camaraderie and adrenaline. The competitive nature of athletics often pushes them to return to their sport prematurely and jeopardize their health.

“It is just so hard for people that are so used to being active to go from that to cutting back, and then they get anxious that they are going to fall behind, they are going to get out of shape. So you see a lot of resistance to that, especially with the more serious athletes,” said Meggie Morley, DPT, OCS from Apex Physical Therapy.

“It’s hard for me because I don’t have any other way to exercise,” Foehr said. “And right now, I haven’t really been exercising, so physically and mentally, it’s kind of hurting me.”

With this anxiety, the risk of injury is much more significant and can be more severe.

“If you go back too soon and totally reinjure yourself, then you are looking at another six months, or maybe a surgery, and that is gonna push you back even more,” Morley said.

However, this pressure is not always internal. In many cases, an athlete can feel the pressure from a parent or coach.

“For a lot of the times, I see it more from the parents freaking out that they are not going to play soccer for three weeks or something, and I do not know if the kid cares that much,” Morley said. “But sometimes you can sense that the pressure is coming from the parents.”

Whether the stress is internal or external, it can be incredibly influential. Often, the expectations mount on an athlete, causing them to think about the short-term benefits of winning a game instead of their long-term physical wellbeing.

“I think athletes are so used to just pushing themselves and getting through stuff that even if it is physically, I think sometimes they are afraid to say that they feel injured because then they might lose playtime or they are starting to feel anxiety around their sport or anything like that,” Morley said.

From a collegiate athlete’s perspective, it is hard to find support even from their teammates in such a competitive environment.

“You got a lot of lonely rehabs. You rehab while people are practicing, so your routine is a little different. You got guys that are on your team, but there is only so much the person can tell you ‘get better’ before you get irritated,” Zaire said.

Despite the drawbacks, there are some hidden advantages to being injured. In many cases, student-athletes can take time during recovery to escape the usual stress of a sports season. “A lot of the time, I tell them just to relax,” Morley said. “Like, you guys are working so hard, and you have such crazy schedules that you just take the time to relax and let your body recover and not feel guilty about it. And just take it as an opportunity to recharge a little.”

During recovery, athletes often find ways to stay involved in their sport, and they can also take on independent hobbies to remain productive.

“I’ve tried to contribute in some other ways by, I don’t know, cheering, and kind of motivating them [the team],” Foehr said. “I also like to sing. I do choir, and that helps because I go to choir every morning and then just let it out there.”

When athletes are forced to take a mental break and reflect because of an injury, they also get an opportunity to restore their bodies and improve.

“I mean, young athletes, we are really strong and really healthy,” Gittoes said. “You get injured, and it is going to be tough, but it will get better, and you will come out stronger.”

Injury can impact how an athlete comes back to their sport, but it can also pave the way for jobs off of the field. For Zaire, his lack of playtime left him undrafted in the 2018 NFL Draft. He was then able to explore new career opportunities.

“I had decided to get more into the X’s and the O’s and the mental part of the game and being able to find a way to get better even though I physically could not do it at that time,” Zaire said. “So being able to get familiar and have a lot of practice talking to my teammates and stuff, it just kind of translated to doing it in front of the camera. It kind of kept me feeling like I was still playing, but I just looked better and dressed a lot better.”

While working in sports broadcasting for CBS Sports and Overtime, Zaire can reflect on his injury with a new perspective as he looks to inspire the next generation of quarterbacks.

“There is no playbook on how to deal with your individual adversity,” he said. “But the best lesson is to, you know, find that mindfulness in that present field moment that you can exist in that helps you get through day to day, and the only thing that matters is what you think about yourself.”