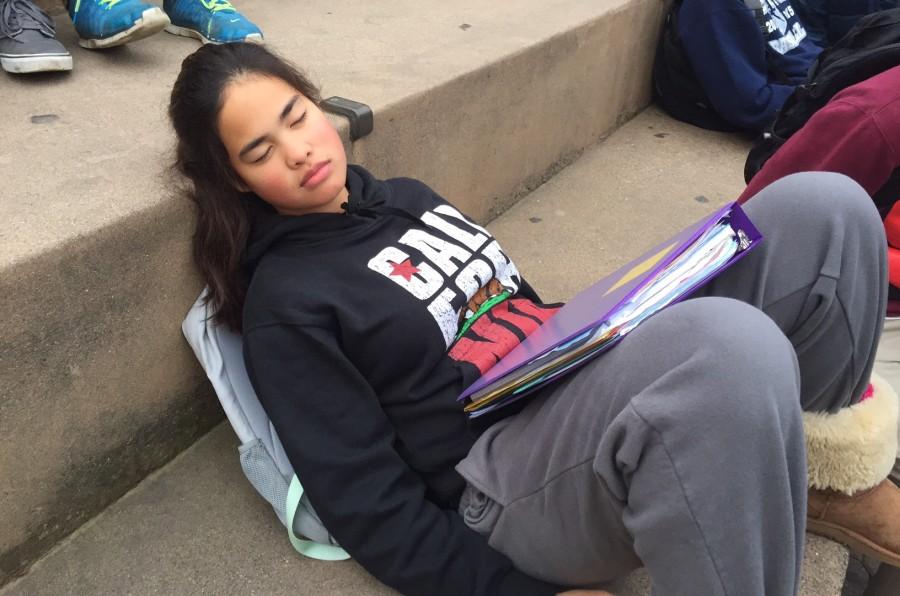 Sophomore Tyrese Lopez tries to catch up on sleep in the quad after a long night of doing homework.

Students are struggling with rewiring their sleep routines after the first week back from winter break.

“Although two weeks away from school doesn’t seem like a lot, getting back into the usual groove was tough, especially if a student participates in any extracurricular activities or AP classes,” said junior Erin Wise.

After having those weeks off of school for winter break students have trouble transitioning back to their normal schedules. During break many students have been staying up much later than usual and waking up later as well.

“Over break I was waking up around 10:30 a.m., but I usually wake up around 6:15.  I was struggling to get up and run laps at school and do work after sleeping so much more for two weeks,” said freshman Maddy Palarca-Wong.

Sleep deprivation has also been causing some students problems with motivation and staying focused on their school work. For most students, their brains have had a two-week break from things like English and chemistry. However, returning to school and having lots of homework and classwork given to them at a forgotten pace was not easy to keep up with.

“It was a hard transition back into a normal schedule because my sleeping pattern was off. It was really difficult to make myself try and do homework again.” said junior Nisha Pandita.

According to Dr. Judith A. Owens, getting about nine hours of sleep is essential for a teenager’s brain to properly function. Students are often tired after coming home from school, leading to procrastination on homework and staying up later to finish it.

Getting an unhealthy amount of sleep can lead to problems in the future like heart disease, high blood pressure, and other diseases. Sleep has a huge effect in the normal daily functions of the brain and is very important in order to do well in school.

“Sleep is not optional. It’s a health imperative, like eating, breathing and physical activity,” said Owens.