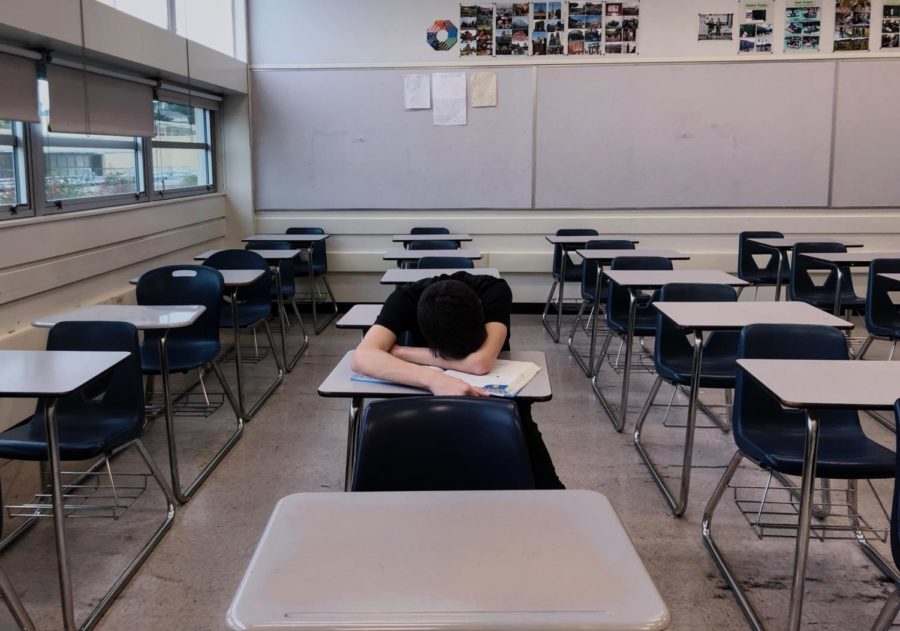 Students often sneak in naps during class to make up for lost sleep the night before.

While students work in their English class, at least one student is found struggling to stay awake. Sitting in the corner with their head down and eyes fluttering, the image of the whiteboard slowly begins to fade.

The student is now unable to stop themselves from falling asleep, but a bad grade in English class is not the only consequence.

For students especially, getting at least eight hours of sleep is crucial. A study at the National Sleep Foundation found that without a good night’s rest, students will find themselves unable to focus, learn, and concentrate in class.

Stress and the weight of academic work have become leading causes of students getting inadequate sleep and can affect a student’s ability to learn and excel in their classes.

“My lack of sleep makes it harder to concentrate and falling asleep in class puts me behind my studies and hinders my ability to comprehend the content,” said Jenny Xu, a sophomore.

As their lack of sleep builds up, some students’ ability to understand lessons in their classes deteriorates, creating more stress.

The pressure of perfectly completing a science project or math homework can alter a student’s ability to get a good night’s rest.

“I would say that both being preoccupied and having excessive school work causes me to lose more sleep,” said Larissa McCord, a junior.

Without a proper amount of sleep, a student’s performance is negatively affected, as their academic future and career rest on their ability to get a sufficient amount of sleep each night.

When students fall asleep in class, they lose important information and a motivation to do school work.

“Due to lack of sleep, the next day I feel tired and it’s hard for me to focus in class due to me falling asleep during the lesson, which also results in me not wanting to do anything and feeling unmotivated,” McCord said.

While not being able to comprehend the content in classes or not having an incentive to do work results from not enough sleep, it could also lead to more serious health problems.

According to a study at Harvard University, not enough sleep each night leads to stress, which raises glucose levels and causes them to be processed differently. Since glucose is what cells use as energy, this later may result in serious health issues, such as heart disease, high blood pressure, diabetes, and even death.

“People who don’t sleep as much have been shown to have higher rates of cardiovascular disease or heart attacks, diabetes has an impact on food metabolism in a way that seems to promote weight gain and there’s even some data showing that it affects mortality or how long you live, so people who curtail sleep do not live as long as people who get enough,” said Harvard Medical School’s Dr. Lawrence Epstein.

A student’s natural sleep cycle being disrupted can also affect their mental health. Sleep deprivation and one’s mental state are closely related to each other; with continuous deprivation of sleep combined with the immense stress from excessive school work, a student’s mental health could be damaged.

When teens receive fewer than eight hours of sleep each night, alcohol and drug use are more prevalent.

“There is data that shows that because teens are not fully developed in terms of their executive functioning, even acute short-sleep can lead to risky behavior and poor judgment. The combination of the lack of infrastructure and poor sleep sends them down the wrong path,” said Dr. Mary Carskadon, a professor of psychiatry at Brown University and director of chronobiology and sleep research at Bradley Hospital in Rhode Island.

Lack of sleep has also been shown to be closely related to changes in mood. For instance, people may feel more stressed, irritable, and sad, according to a study at the University of Pennsylvania which found that subjects who got less than four and a half hours of sleep had a substantial shift in mood.

“When I don’t get enough sleep, the next day I feel very fatigued, I get migraines, and I am irritable,” Xu said.

Falling asleep while driving is a fatal effect of losing sleep. An average of 328,000 crashes occur annually due to drowsy driving, with around 6,400 of those crashes ending in fatalities, according to a study by the AAA Foundation for Traffic Safety.

Being aware of your surroundings is an imperative aspect of driving, and drowsy driving blocks the driver’s ability to be more perceptive and attentive.

The effects of sleep deprivation are similar to the effects of alcohol use. According to the National Sleep Foundation, driving after being awake for 18 hours straight is the same as driving with an alcohol concentration level of 0.05 in one’s blood. After 24 hours of being awake, it is the same as having a blood alcohol level of 0.10, which is higher than the blood alcohol level that is considered to be drunk (0.08). Driving drowsily can be even more dangerous than driving while drunk, as drivers can easily nod off and are not able to react to certain situations on the road.

“There’s a theory that views self-control not as a stable personality trait, but as something that is subject to the strains and stressors of the environment that people have to navigate on a daily basis. So imagine that self-control is like a muscle — if we exert a lot of energy and expend a lot of effort we need rest and recuperation in order to restore one’s ability to self-regulate,” said Dr. Ryan Meldrum, an assistant professor in the Department of Criminal Justice at Florida International University.