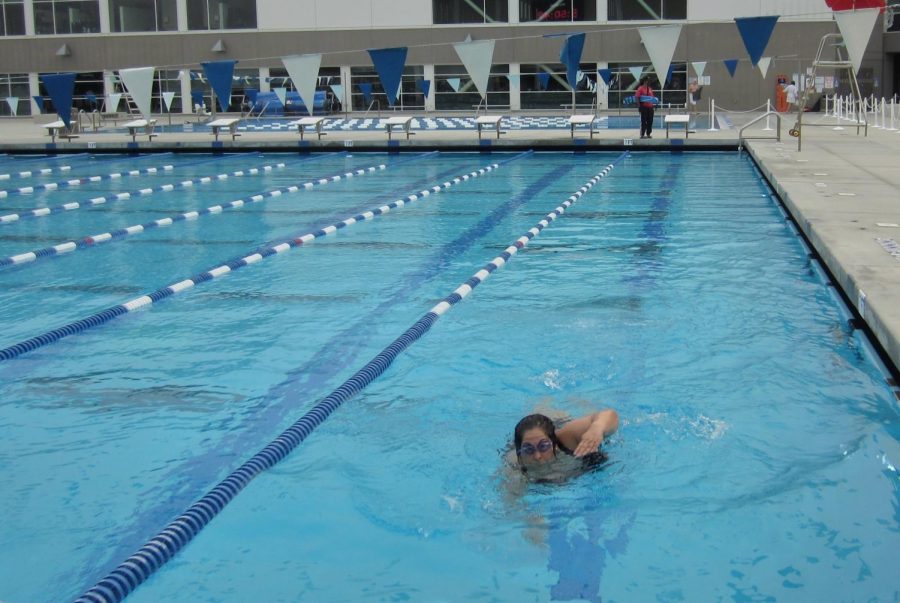 The Olympic pool at SMAC is available for those who make an appointment ahead of time. According to the SMAC website, members using the pool may experience higher chlorine levels in alignment with U.S. swimming recommendations.

In an effort to adjust to the new normal, San Mateo Athletic Center (SMAC) had the solution of creating an outdoor fitness center to allow members to continue their workouts while staying safe, after being closed for five months.

Located on the College of San Mateo campus, SMAC opened its outdoor space with fitness equipment on Sept. 1. It has had to suspend its indoor gym services twice since California begun a stay-at-home order in March. A few weeks ago, SMAC was also able to reopen its outdoor pools.

“I think it’s a good idea that they brought equipment out here,” said Susan Hiestand, a SMAC member since 2016. “They found a nice place that’s protected from the wind and did a really nice job on the setup. It’s good that people have access to this equipment.”

Adding to Hiestand’s insight, Jerry Grainger, a SMAC member since it first opened in April 2010, said that the outdoor fitness center was a creative solution. Yet, Grainger acknowledged that the online reservation program seemed unnecessarily complicated.

“I find the reservation calendar system a little bit clunky, but then I’m not a big fan of online stuff anyway, so I’m kind of cranky about that,” Grainger said.

According to the SMAC website, members can use the pools or participate in outdoor classes no more than three times per week. The pools also have a limit of one person per lane. On the other hand, visits to the outdoor facilities are unlimited as long as members make no more than two back-to-back reservations per day.

The gym currently has reduced operating hours. The hours on weekends have changed significantly; the gym closes five hours earlier on Saturdays and Sundays than before the shelter-in-place. To accommodate senior citizens over the age of 62, SMAC has added a Senior Only Hour from 11 a.m. to noon daily.

Having used the outdoor gym twice, Hiestand said she was pleased that her favorite machine, the functional trainer, was included in the setup. But, she noted that it was occupied often because of its popularity.

According to Wayne Buckner, a personal trainer at SMAC, the managers and staff chose which machines to bring out based on their popularity. Buckner said that they hope their judgment was correct. Still, if members were to request a specific machine, they would discuss and arrange the change with their managers. Also, Buckner explains that the outdoor fitness center has helped SMAC continue its operations.

“This outdoor space has helped us with member retention,” Buckner said. “So I think that it has given us some borrowed time to wait for the gym to open back up. But I really can’t say when the indoor gym will open again because it’s been so up and down. When the shelter-in-place was lifted, we thought we were going to be able to open inside, but we ended up having to close it three weeks later.”

Hiestand agreed that “it’s hard to have expectations these days,” but was sure that SMAC would continue making changes and innovations. Grainger added that he doesn’t think there will be many changes until the spread of COVID-19 is controlled.

“Reopening depends on developments with the virus,” Grainger said. “I don’t think it’s going to change dramatically in the near future. We’re all on hold until someone comes up with a vaccine or a cure for this thing.”

To keep everyone safe, SMAC makes sure that members have a reservation, are free from COVID-19 symptoms, wipe down equipment after use, social distance, and wear a face-covering. Staff also use electrostatic sprayers to disinfect machines.

“It’s a big deal for us to be able to be outdoors; a lot of gyms aren’t able to do that,” Buckner said. “And that kind of sucks because personal trainers can’t go back to work, and members can’t work out.”