Small changes can lead to a healthier Earth 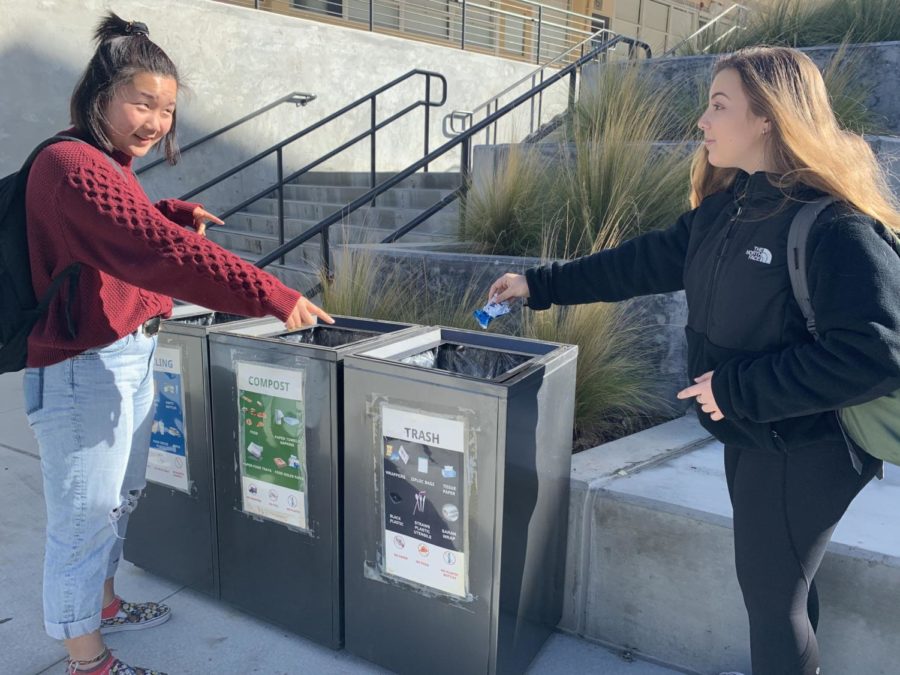 Eva Robertson, sophomore directs Liz Gurevich, sophomore, to the right bin to dispose of her trash.

Earth has been a home for many types of species. Its flourishing forests and oceans are sustainable living conditions for many animals; however, as the years progress, this beautiful planet continues to be flooded with trash.

Research done by Smithsonian suggests that in 2025, the amount of garbage produced by humans will grow from three to six billion tons per day. Records show that the amount of waste will reach an ultimate high at the turn of the 22nd century at 11 tons per day.

Common areas known as landfills hold waste deep under the surface of Earth. The piling mountains of trash, which release CO2 and methane, directly impact global warming and climate change, which puts Earth in danger of more natural disasters such as flooding and hurricanes. There will also be an increase in rapid temperature changes and a shift in seasons.

However, there is a solution to these global issues: proper waste disposal.

Tasks as simple as composting and recycling waste can eventually slow down the detrimental effects of the overall waste consumption which affects landfills on the Earth. Sources suggest that with more population growth, the development of waste will also reach a substantial amount. Another factor is rapid industrial and urban growth within cities, and countries haven’t found a way to deal with the amount of hazardous waste that is produced.

This is solved through the use of compost bins, which are used for depositing food waste, and recycling bins, which reduce the need for raw materials.

Changing the waste disposal process of the whole world is a much larger task which would need the cooperation of the world to achieve. Starting in schools might be a simpler process.

According to a study done by New York’s Department of Environmental Conservation, schools all over America produce about 48 to 90 tons of waste per day. Not only is this bad for the environment, but it is also not cost-efficient.

Many schools are left in the dark about this budding issue. Kids do not realize how bad this problem will be in the future. Due to the gravity of the Earth’s environmental situation, paying more attention to saving the planet by reducing waste and finding ways to solve this problem could help future generations.

Even in the 21st century, after all the warnings said by scientists about how the usage of compost and recycling bins can save the environment, people still choose to disregard.

This poses a problem.

To solve this problem efficiently, a tri-bin system was created, which contains trash, recycling, and compost bins. To promote the usage of these bins, some schools implemented this system in their campus.

The tri-bin system was recently introduced to Carlmont High School by the Green Team, a club that strives to protect the environment. The campus contains 90 recycling and trash bins in various locations.

“We [the Green Team] do collaborate with the admin and custodians for our bigger projects, such as the tri-bin system, but besides that, we are pretty much on our own,” said Emna Sellami, a junior and co-founder of the club. “We had a promo video last year that every third-period class watched, and we’re probably going to show it again to remind students how to properly dispose of trash.”

Despite the 72 percent of Americans that don’t compost or recycle, there are some people who are very disciplined about how they dispose of their waste.

“I separate my waste at school and at home. I have a system that I use at home, and it is easy for me to follow it at school too,” Miskelly said.

Principal Ralph Crame expressed his frustration with regard to students not properly disposing of their trash. He feels that students should not need to be reminded to clean up after themselves, but rather they need to be more responsible for keeping the campus clean.

“I feel disappointed when students leave their waste behind because this is their school, and they are too involved in other things [regarding their own lives] to show more pride in the way their school looks,” Crame said. “The next step would be to get more support in maintaining the tri-bin system. We have people who do not take the time to separate the trash from the recycling [and] the compost. We also need more volunteers to manage and maintain this system.”

For some high schoolers, time is not on their side. Between their busy school and home life, sorting their waste is usually not a concern.

“I am always in a rush,” said Maddie Sherwood, a sophomore. “By the time our lunch period is over, I am usually in a rush to get to my next class in time. I know it’s good for the environment, but my mind is typically somewhere else.”

Although it is the students’ responsibility to sort their waste, those who choose not to make the custodians’ jobs more complicated.

Custodians like Amilcar Sagrero, who works at Carlmont, say that some students make his job harder by improperly dividing their waste among the three bins.

Even though Carlmont does provide the proper resources, some students still get confused about how the tri-bin system is used. The bins have images to express what trash goes in each one of them. However certain students feel that if the images could be more descriptive they would have more success in disposing of waste in the proper containers.

Nina Chung, a junior, displayed her confusion when it came to disposing of plastic objects.

“So then where do the plastic bottles go? Where do the plastic utensils go? I mean, I personally try to do my share in saving the environment, but I can’t if I am not sure on what to do,” Chung said. “Honestly, I think that the bins are well-intentioned but they need to make what objects are supposed to go in the containers more clear to people.”

In contrast, certain students feel as if they don’t want to put the effort in to determine which container should be used for their waste. They just want to get rid of their trash, no matter what type of material it is made of.

“I’m honestly just lazy,” said Elizabeth Gurevich, a sophomore. “It might be good for the environment, but if I were being honest, I don’t care.”

In Chicago, 14 public schools across the city united with a recycling program and the Seven Generations Ahead program to teach kids about the compost and recycling systems. They focus on student-based workshops, assemblies, and hands-on learning with students to help save the environment.

A solution for Carlmont might be one similar to Chicago’s work.

Students feel as if the school should give some sort of reminder or start a school-wide program to help raise awareness on how to take time to split up trash.

“Most students have either a Snapchat or Instagram. There is even an account for Carlmont on both of those types of media,” said Lauren Wang, a junior. “If they were to maybe post something on either of those platforms on a regular basis maybe it would convey the message to more people.”

If the school system were to emphasize how important the concept of waste is, more people might want to help the environment and use the tri-bin system more responsibly.

Wang said, “Saving the environment should definitely be a priority to the students as well as the administration. If the school were to stress using the different bins a little bit more, then I believe that the compost and recycling bins would be more effective.”