Small pets are more likely to be abused 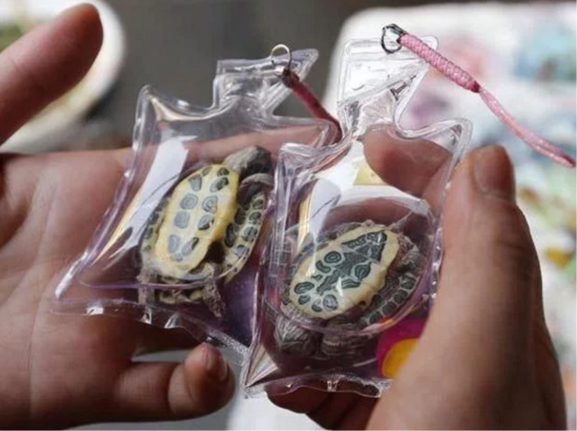 At the Beijing Olympic Games a man was selling live turtles, fish, and lizards in plastic bags as souvenirs. This shows just one example of the unspeakable crimes that are committed against small animals whose lives are often considered less precious than those of bigger animals.

Most people love dogs. Their fluffy faces, wagging tails, and crazy fur make them purely irresistible, especially when they roll over and ask for a tummy rub.

Most people love dogs, so when a dog gets harmed, most people care.

There have been several incidents in my life where I have witnessed the mistreatment of pets such as birds, hamsters, and fish, whose small sizes make some people think that they require less care than a cat or a dog.

Fish are, unfortunately, the animals that I have seen this abuse happen to the most. Due to their inability to produce noises or express obvious emotions, like cats or dogs, their owners have a tendency to assume that they are constantly doing okay.

Keeping a fish alive is very different from helping a fish stay healthy in its environment. Betta fish, some of the most popular pets among pet owners, are often kept in minuscule tanks that are barely a gallon, when they actually need tanks that are 12 gallons or above to thrive.

Fish are subjected to other forms of mistreatment as well — being left to starve because their owners no longer want to take care of them, or being flushed down the toilet on several occasions. The internet is also full of horror stories about fish being kept in dirty plastic bottles in negligent pet stores.

Other pets like small rodents can’t escape this fate either. Rodents are often kept in cages that lack the needed space and toys to thrive, and are frequently forced into stressful situations for the sake of their owner’s entertainment.

However, it was a personal experience that made me truly realize that there is an issue surrounding small pet care.

When I was six years old I loved animals, as I do now, so I would always visit pet stores to look at all the fascinating creatures inside. One day I went with my aunt, and after an hour of begging I eventually got her to buy me a baby turtle that was about two inches in size.

My aunt never really asked anyone any questions on how to care for the tiny creature, and when it was eventually passed off to my grandparents, they didn’t either. A couple of months later, it had died despite what they thought had been their best efforts.

To this day, I wish that my aunt would not have bought that poor baby turtle for me, simply because she assumed a turtle would not be that hard to care for.

Animals, no matter how small, are hard to care for — they are a constant responsibility that cannot be pushed aside or ignored, and the moment someone buys an animal they need to be ready to commit not only to keeping it alive, but to helping it live the most healthy and fulfilling life that it can.

Animals are not entertainment and they are not a way for people to teach their kids responsibility. They are living beings with needs and wants and lives, no matter how small or simplistic they might be. Just because we own them doesn’t mean that we have the right to let them die.

Overall, if someone cannot give an animal the best life that it can have with them, then they should not have that pet. Unless someone is willing to put in the time to understand what that animal will truly need, they have no business in buying that pet.