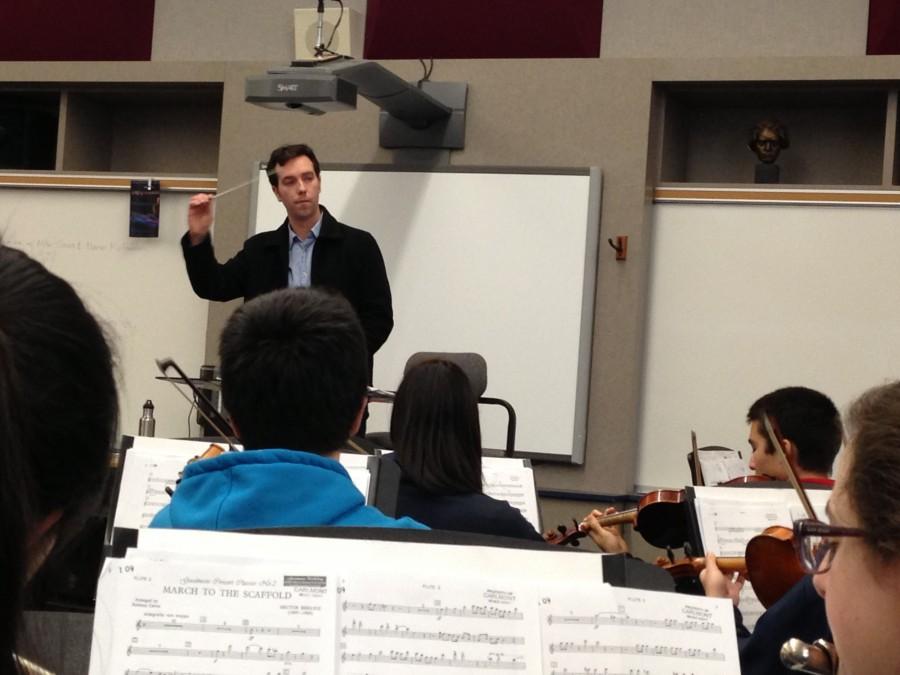 High school students are accustomed to having the occasional substitute teacher, but sometimes a teacher’s extended absence calls for an unusual solution.

This is especially true for Carlmont’s music program, where there would be complications with hiring a long-term substitute teacher. Sophomore Ramy Wong of String Orchestra said, “A sub wouldn’t be teaching us anything, [and] we wouldn’t be ready for our performances.”

According to an announcement at Chamber Music Night, John DaBaldo, one of Carlmont’s two instrumental music teachers, will be undergoing back surgery this week and most likely will not return until after spring break.

In light of DaBaldo’s extended absence, Assistant Instrumental Music Director Lieven Smart has been covering all instrumental music classes at Carlmont since the end of February.

Smart had already been teaching sections of Symphony Orchestra and Concert Band, but he is currently covering all of these groups. In addition, Smart is working with DaBaldo’s String Orchestra, Jazz Ensemble, and Symphonic Band.

Smart said, “I preside over a jazz club twice a week at Carlmont as well as Ralston, which I’m now splitting with [Jordan] Webster and [Peter] Thielen [the Ralston music teachers] so I can get to Carlmont in time.”

Including these jazz clubs, Smart is teaching eight classes.

Senior Jade Neyroud of Symphony Orchestra said, “[Smart] is doing an excellent job covering — it’s a lot of work and a lot of stress. It’s really admirable that he is taking on all this work and still manages to make us sound wonderful.”

Smart recently worked on both the musical “Annie Get Your Gun” and Chamber Music Night.

“For the musical, he was there almost every night after school for a month or two,” Wong said.

Smart’s primary instrument is the trumpet, and he can play every band instrument. However, he did not previously teach any section of DaBaldo’s String Orchestra.

Wong, a violinist in this ensemble, said, “It’s pretty amazing that he can teach strings this well.”

Over spring break, some of Carlmont’s groups will be performing on a Mexican cruise. If DaBaldo is unable to go on the trip, Smart will be conducting every group’s performance.

Neyroud said, “We all wish for DaBaldo to come back because although Smart is doing an amazing job working with us, the music program isn’t the same without our dynamic duo.”