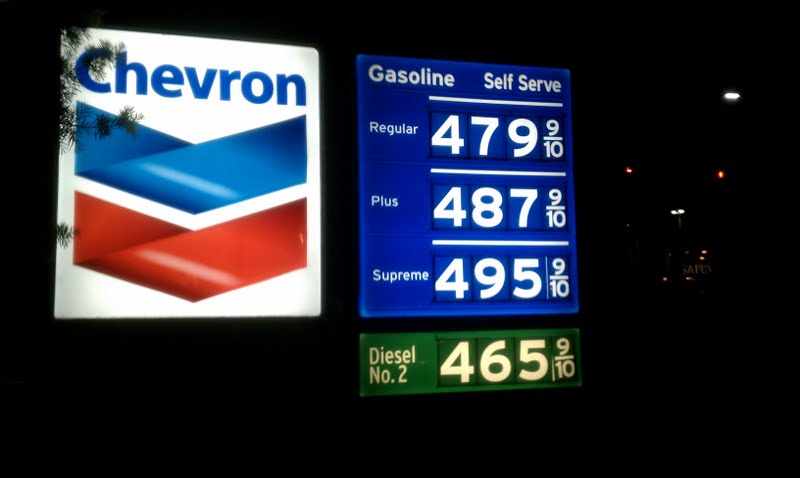 The gas prices in Belmont are even higher than the California average.

The surge in gas prices in recent days affected the outlook of drivers and those planning to drive.

The average of gas prices in California raised from $4.17, setting a record at $4.67 for the largest one-week increase in the price of gas on Oct. 8.  Carlmont drivers have been affected by the massive spike in prices at the pump.

“I’m still looking forward to driving, but it’s definitely something to think about before getting a car,” said sophomore Matthew Allen.

The Chevron Corp.’s huge refinery fire in August in Richmond, California has stood idle amid investigations to the causes of the fire.  The refinery’s fire affected the supply of crude oil being converted into gas.

A more optimistic analyst, Denton Cinqegrana, executive editor of the Oil Price Information Service (OPIS), stated, “I think the worst is in the rearview mirror right now and that between Halloween and Election Day California will be back to where we were before the spike.”

Tom Kloza, chief analyst at OPIS, stated, “I don’t want to say the coast is clear but there is a light at the end of the tunnel,” in a bit less optimistic tone as his counterpart cites supply and demand; when the supply is low and the demand is high then the price can only go up.

In an attempt to lessen the effects of the surge, California Governor Jerry Brown told regulators to allow the winter blend of gas to be sold earlier than usual.

Historically, California has gas prices higher than the national average.  The summer blend had been used to compensate for the excess heat so it won’t create more pollution.  Thus, during the winter a cheaper blend can be used.

Sophomore Mitchell Wright stated that he’ll “probably have to charge for rides” if the gases keep rising.