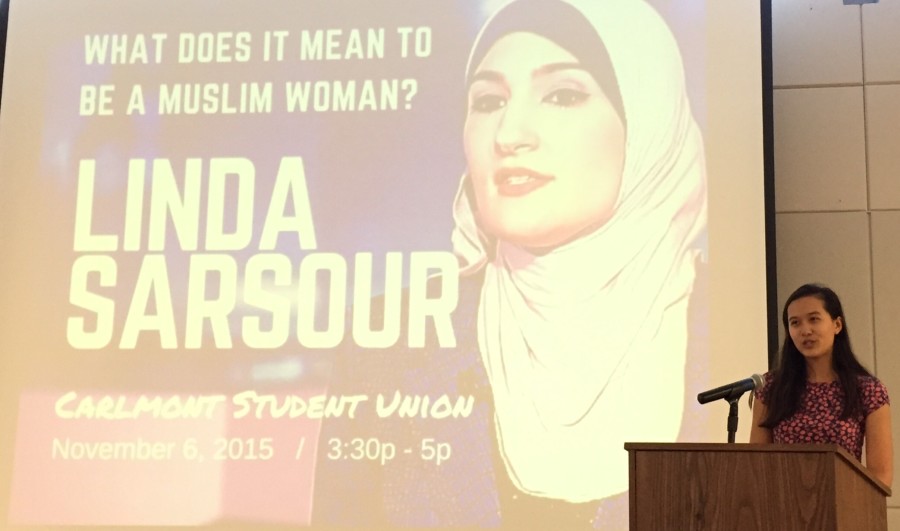 Social activism isn’t always the first thing that comes to mind when students think of what happens at their school.

Muslim feminist Linda Sarsour strived to change the stigmas around social activism at her talk on Friday, Nov. 6.

“I believe that people who are activists, who want to fight for a better nation, are the most patriotic — and anyone can be an activist,” said Sarsour.

After seventh period, students flooded into the Student Union to hear what Sarsour had to say about standing up for what is right as a Muslim woman in today’s society.

Sarsour was invited to Carlmont by Muslim Fellowship Club President junior Naser Abdelrahman, who came to meet her when Sarsour gave a speech at a local banquet hosted by CAIR (Council on American-Islamic Relations).

“When Naser found Linda, we realized she perfectly captured elements of both of our clubs. Bringing the speaker to Carlmont was so important to us because it was a great way to expose a large part of the student body to ideas of activism we believed were worth spreading,” said Lawrence.

Throughout her speech, Sarsour called her audience her “brothers and sisters” in an attempt to establish a sense of closeness.

Similarly, the organizing and planning for hosting Sarsour’s event called a lot of collaboration from the presidents of Muslim Fellowship and Feminist Club.

“Since Ashley is in ASB, she was able to put up posters and collaborate with all of us to put announcements out on School Loop. Evelyn did a good job publicizing this event in classes and making decisions as well. Naser and I talked to a lot of teachers to convince them to give extra credit or promote the event. I made a Facebook event to publicize on social media. Naser made all of the posters and worked closely with Mr. Schoenstein to put them in the teacher’s mailboxes,” said Pon.

Sarsour left with a great impression of Carlmont’s diversity. The next day, on Nov. 7, Sarsour gave Carlmont a shoutout in her speech at a CAIR event.

She later tweeted, “Just when you are feeling down, amazing young people remind me the world is in good hands! Thank you Carlmont High!” To keep up to date with her work as an social activist in Brooklyn, New York,  find her on twitter @lsarsour.

Carlmont students were equally impressed and inspired by Sarsour.

“Linda really stressed how she wanted us to be able to question the things that seem unjust. She told us that we should not just let injustices be; we should use whatever skills we have to solve them or raise awareness about them. I hope Carlmont students will begin to take her advice,” said Lawrence.

Sarsour encouraged students to become social activists in their communities because “remaining silent means you’re part of the problem too.”

“Being an activist can be hard at times, I’m not going to lie. Making change is a process and it takes time, but the best way to make change is to do it little by little. Whether it is reading an articles on the Feminist Club Facebook Page or contributing your writing to our zine, that is making a difference. Change will not come overnight, so I think it is essential to know that you can make a difference by merely educating yourself and being critical about the situations around you,” said Pon.

Recognizing that not everyone has the means to take social activism to her level, Sarsour asked her audience to “be part of a story you care about” by engaging in discussions about current topics of social injustice.

Feminist Club has grown from small lunchtime discussions to a a Facebook population of over 200, and the club meets weekly to discuss and debate a variety of issues. Like Sarsour, Pon considers the discussions priceless.

“While people might think we are not ‘doing anything,’ talking about issues is something and it is very important,” said Pon, “When you have the opportunity to advocate for change, you can make educated decisions. Sometimes change happens in someone’s mindset and those people can physically make a bigger impact on society,” said Pon.

Inspired by Sarsour’s determination to use her voice to make a difference, Pon considers social activism an achievable goal for anyone, even a high school student.

“There is no wrong way to be an activist. Start small and soon you will start doing something bigger. Step by step, you can make change,” said Pon.