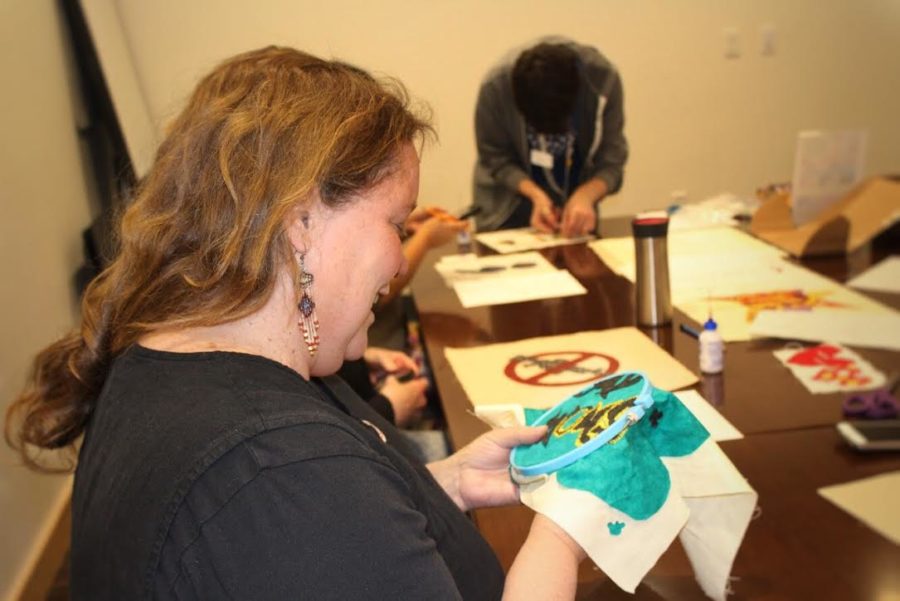 Robin Gadient, the SJSA creative director, embroiders a piece for a student. He wanted graffiti-style letters that said, "share the wealth."

People are angry. People are demanding social and political change.

The Social Justice Sewing Academy (SJSA) provides a platform for people to express their emotions through art.

According to its website, “By using textile art as a vehicle for personal transformation and community cohesion, SJSA empowers youth to become agents of social change.”

SJSA displays their quilts online, in galleries, and in museums and is currently partnering with the San Mateo County Libraries (SMCL), who host many of the workshops. On Saturday, March 24, the SJSA held a workshop in the Woodside library.

“This year’s theme for the libraries is social justice,” Nicole Fernandez, one of the Woodside workshop’s organizers and a member of SMCL, said. “I heard about [SJSA] and thought, ‘we need to bring this into our libraries.’”

The partnership with the libraries has also allowed the distribution of Laurie Ann Thompson’s book “Be a Changemaker: How to Start Something That Matters.”

“Laurie Ann Thompson was at a library convention with Sarah Trail,” Fernandez said. “The libraries are helping distribute a book to one participant at each workshop.”

Sarah Trail started SJSA in June 2016 and is now the Executive Director. After Trayvon Martin’s murder, Trail made a quilt in his memory.

On the SJSA website, Trail writes, “When I combined quilting and social justice, I gained a completely new understanding of what it means to quilt with a purpose.”

“I thought I would come for maybe an afternoon, and then I ended up doing these workshops for five weeks straight,” Gadient said. “[Trail] eventually just asked me if I would join it with her.”

SJSA holds their workshops for 90 minutes. Participants are given a paper to draft a design then get to pick from a large pile of fabrics. Within the 90 minutes, participants will design, cut, and glue down a quilt block that holds meaning to them.

The Woodside workshop only had two participants, which the organizers suspect was due to the March For Our Lives held on the same day. The participants were joined by Gadient, Fernandez, and Holle Chernis, who is also involved with SJSA.

“I think my kids are the reason I’m here,” Chernis said. “Our kids keep us aware of what’s happening in the world. They are the future; that’s why this is so important.”