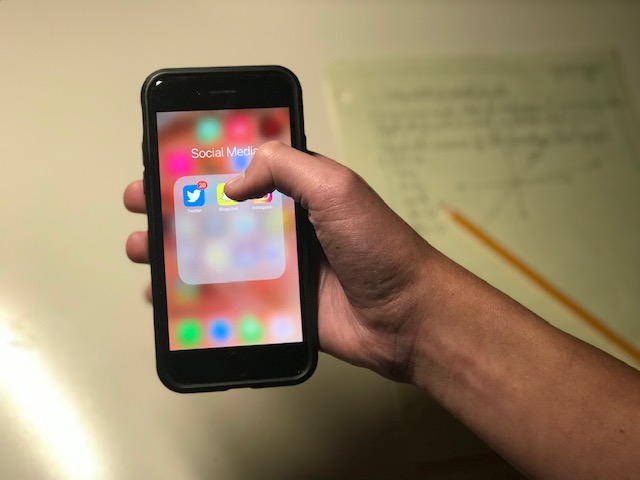 A student chooses to go on social media instead of completing their homework. (Sjoerd Huitema)

A student chooses to go on social media instead of completing their homework.

The temptation of social media causes teens to ‘zone out’ during their work.

Just ten more minutes before a student puts down their phone and starts their homework. Soon, this will turn into 30 minutes — then into an hour.

For many, social media is a way to escape. It is a way to stay connected and to communicate. But as technological progress has increased, so has people’s reliance on it.

“Social media causes me to procrastinate on my schoolwork because it’s very addicting, and I don’t know when to settle down and do what needs to be done,” said Kyla Orthbandt, a junior.

Timothy A. Pychyl, an associate professor of psychology at Carleton University, describes this “stickiness” of social media in his post on Psychology Today as “the economics of attention.”

Pychyl defines this as a survival of the fittest mentality: if a corporation does not develop its app in a way that keeps people’s attention, it means that they will soon go out of business.

He goes on to say that as the number of people using a certain app increases, the value of that app increases also. This is known as the network effect, which can be found when browsing on the internet or when using an app on one’s phone.

And many people stand with this premise.

As the majority of the population who procrastinate are students, this increase in procrastination takes a toll on school life as well. According to a post on Inc.com by business leader and corporate author James Sudakow, science conducted on the topic of procrastination would suggest that one out of five people procrastinate so chronically that it may be jeopardizing their jobs, credit, relationships, and in severe cases, even their health.

“It affects my grades because the quality of the work is not as good as it should or can be,” said Nathan Ohea, a freshman.

However, technology and social media are seen as both distracting and helpful to people, especially students. In Harvard University’s post on technology and student distraction, they believe it to be both helpful and harmful.

Many teachers, staff members, and students seem to agree that while technology is mostly helpful for completing schoolwork or homework, when it comes to social media, it is the exact opposite and prevents productivity.

“I think because there is so much information on the internet, kids are still learning, and they have a lot of curiosity. They actually know a lot more stuff,” said Jaime Garcia, a history teacher.

Other people believe technology to be not only helpful to others, but also to themselves and their work as well.

“The technology I use, which includes email, Google Docs, and other applications that support my work are largely helpful for me to communicate and complete it,” said Gregg Patner, a vice principal.

However, the majority of people believe that when it comes to the social media aspect of technology, it is harmful to completing their work.

“Because I am constantly talking to friends, it tends to keep me from doing what I need to do,” said Hunter Hawkes, a senior.

Other students agree with this premise.

“Sometimes I find myself reverting back to social media because I lose interest, which I think is a problem because the distraction is taking away from learning and grades, which are important,” Ohea said.

However, as with any two-sided issue, there are many mixed views on it. A scholarly article published by Chuang Wang, a Ph.D. of China-City University on Social Media dependence states the enticing desire to be on social media over school or homework is a part of the mind, as it has almost become habitual and takes precedence over anything else.

“I don’t think social media is necessarily a problem; it’s just a matter of willpower and priorities,” Hunter said.

However, some teachers think differently than students on this issue.

“It is definitely a huge problem for some people. My grandson, who got addicted to technology around age 5, was playing games and looking up things to do with his games. And when his parents took it away from him, he started reading more, and he started playing more imaginatively. He was very different,” Codianne said.

But having the willpower to stop procrastinating is not the only solution. According to a post by Oregon State University, one can take control of their work environment, make a to-do list, and establish a routine in order to combat procrastination. One must establish responsibilities for themselves so that they don’t revert back to social media.

People may also establish their own solutions in order to keep themselves from procrastinating.

“I don’t get distracted at all because I keep my work life and my social life separate,” Garcia said.

A post on Mindtools.com says that while it might take a while to get used to, these solutions will become basic tasks if followed regularly and that one must focus on the “long game” instead of the “short-term gain” of procrastinating.

Change is not easy, but it is the first step to betterment. 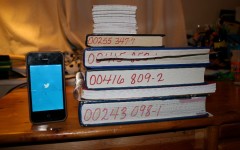 Homework or procrastination -- which is the problem? 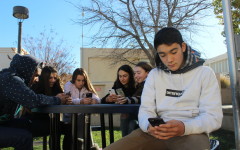 Social media is more than what meets the eye

Is the social media helping or harming students?

With the abundance of social media network sites such as Facebook and Instagram, some are concerned whether these types of media students interact wit...