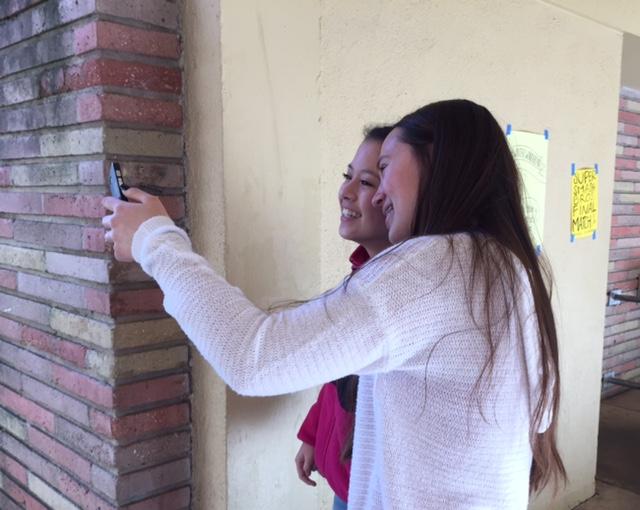 Sophomores Jill Patrucco and Brittany Cheung take a selfie for a Snapchat.

A girl takes 10 photos of herself and chooses one that looks identical to the rest, she uses three filters, captions it with a hipster quote from a John Green novel she hasn’t read, and finally posts it while praying that she will get more than 100 likes on her selfie.

Nowadays, we can tell how popular someone is by how many likes they get on their Instagram photo, or how many retweets they can get and above all the number of followers they have. If the picture or tweet doesn’t get enough likes the person would take it down, fearing judgement from their peers.

According to Huffington Post, social media has turned life into a popularity contest seeing who can get the most followers, likes, etc.

There’s many steps people use to ensure that there post will get maximum likes or retweets. Is the photo artsy, funny, does the caption make sense, but is it also witty enough? All of this unnecessary stress in hopes that virtual friends will like the photo.

It is ridiculous that people strive to be popular by way of virtual friends.

According to Time Magazine, the most liked Instagram photo to date, 2.4 million, is a picture of Kim Kardashian and Kanye West at their wedding.

Just because Kardashian’s photo has the most likes, it doesn’t mean that she is the most important person in the world.

It comes down to the fact that people have different opinions, as much as society generalizes the public’s likes and dislikes, people will physically like the post if they actually like it.

Social media is supposed to be another way that friends can communicate through photos and thoughts. Society makes it seem that the amount of followers you have is the most important thing in life.

According to a study done by the University of Salford, even though social media is supposed to be a positive influence, 51 percent of Facebook, Twitter, and other social media users claim it has a negative effect on their life.

So the next time you’re about to rewrite your tweet for the fifth time, or put another filter on your photo ask yourself is it worth it to put that much effort in for your virtual friends?