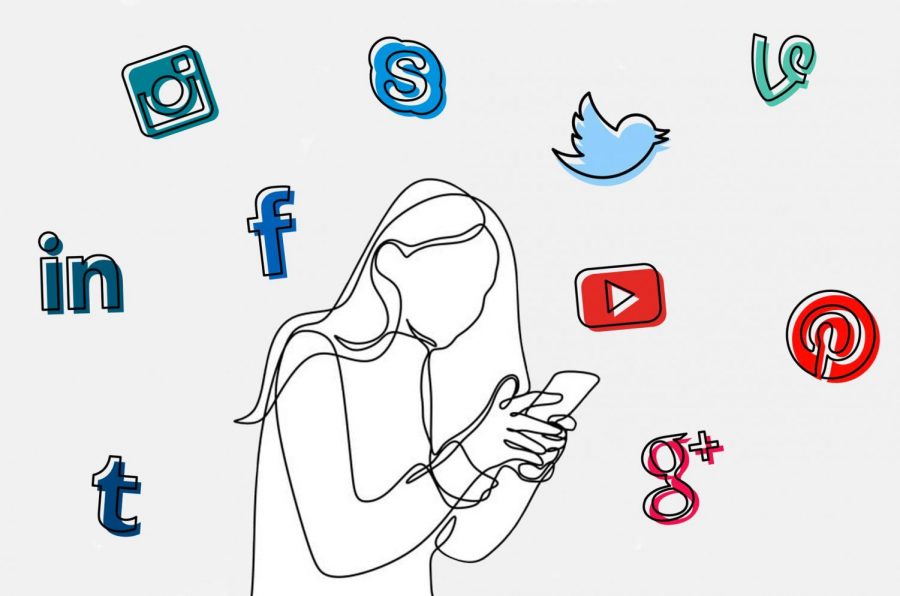 A girl is on her phone, surrounded by social media. "I don't like the concept of social media because I get so distracted by it. At the same time, I feel like I can't delete it," said Caroline LeVans, a junior at Castro Valley High School.

In the modern age of digitalization, social media use has become increasingly more common and ingrained in society.

About 45% of the human population has a social media account, adding up to 3.5 billion users. Due to that large number, many prominent social media sites aim to create worldwide communities. For example, Facebook strives “to give people the power to share and make the world more open and connected.”

“Social media is a way I can talk to my friends, especially now, during the shelter-in-place. It helps me connect with them when I’m not around,” said Caroline LeVans, a junior at Castro Valley High School.

Despite this, studies regarding the negative impacts of social media are causing some to question its effects on society.

“You can become dependent on social media, and it can become second nature. It can get to the point where it starts affecting your daily life and your daily schedule,” said Lauren Tran, a sophomore. “As much as I want to say social media is a good outlet, there are very detrimental aspects of it, and it should be reasonably controlled.”

Social media has been linked to a rise in suicidal behavior and mental illnesses, as well as personality, brain, and eating disorders, especially in teens.

Despite this, social media has its benefits. Tran acknowledges that social media can connect others worldwide and spread awareness.

“Social media is one of the main ways people try to run campaigns. Normally, it’s for a notable cause, like climate change and the food industry. I think it’s relevant and really important that more people get informed,” Tran said.

However, while LeVans said that social media is an excellent way to inform others, she finds it to be ineffective in many cases.

“I find that a lot of people tap through stories mindlessly, and they don’t take the time to truly look at an important post, at least for [Generation Z]. We have a short attention span,” LeVans said.

With a shorter attention span comes less critical thinking, which makes false information appear more trustworthy. According to ScienceDirect, the lazier someone is, the more likely they are to believe and spread incorrect information.

This is especially concerning now, as nearly two-thirds of Americans get their news from social media. With the rise of COVID-19 anxiety, officials and social media sites themselves are worried about the spread of false news.

In addition to misinformation, social media can also enforce certain societal expectations, including ones involving body image and popularity.

“Social media can be toxic because a lot of times, we can get it into our head that you’re not valid unless you have a certain amount of likes or comments, or your photos aren’t aesthetic enough. Even on a fun social media site, everybody wants to be famous,” LeVans said.

LeVans is not alone in this perspective; Mia Yoch, a sophomore, shares LeVans’ sentiments.

“Social media creates a false beauty standard, and I don’t want to surround myself with something that is clearly only the best-edited version of themselves,” Yoch said.

Although Yoch believes that not all of the messages that social media promotes are healthy, she still enjoys using it to connect with others and to relieve stress.