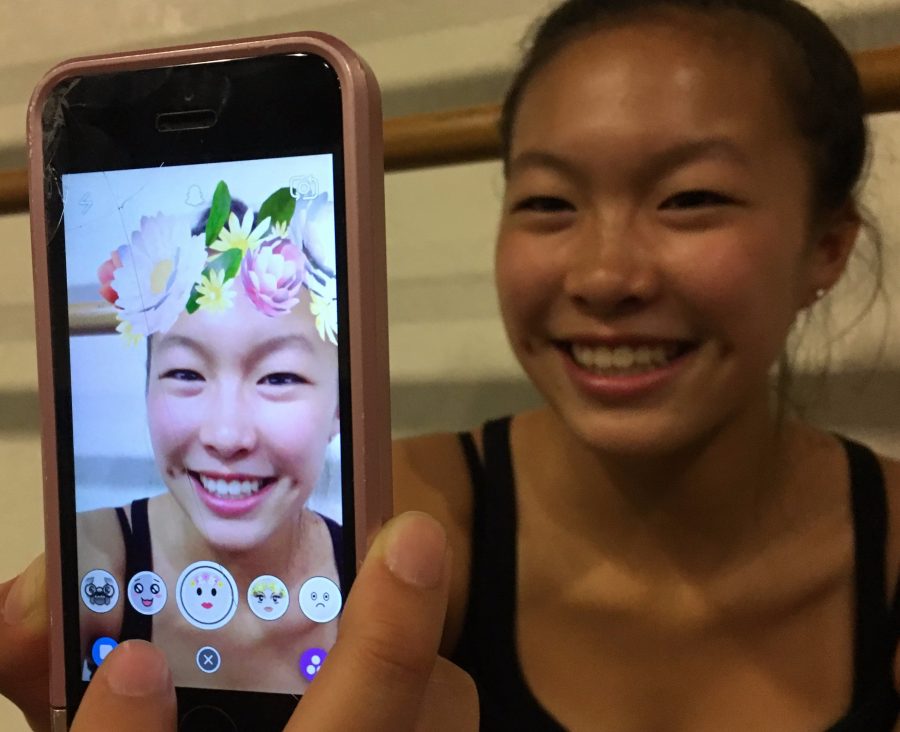 Emily Chinn finds the perfect angle to Snapchat a picture to her friends of how excited she is to dance in the Kirkpatrick’s School of Dance studio.

Teenagers are more focused on themselves and what other people think of them, however, they have never realized their own personalities changing by proceeding on social media.

People can electronically communicate with other users more easily than by sending a letter, especially on social media. Social networking can be an efficient method to interact with new people from different parts of the world; however, it is lowering teenagers’ self-esteem and increasing their anxiety.

Dr. Catherine Steiner-Adair, a clinical psychologist and author of “The Big Disconnect,” said, “Part of healthy self-esteem is knowing how to say what you think and feel even when you’re in disagreement with other people or it feels emotionally risky.”

Teenagers are attached to Instagram, Snapchat, and a bunch of other social networks, which are causing some major problems.

During 2014 and 2015, 94 percent of teenagers went online using a mobile device daily and about 71 percent of teens use more than one social media site according to a Pew Research Center survey.

Social media doesn’t just affect the brain, it may also cause some problems in another person’s life.

Sophomore Audrey Chu said, “I check my Snapchats about every 30 minutes, which is a total of a few hours a day. It helps me stay connected with people that I don’t normally see on a daily basis, but distracts me from homework a lot when it comes to Snapchat streaks.”

Teenagers have been more focused on answering Snapchats rather than working on homework. Nevertheless, getting multiple notifications can trigger a person to look straight at their phones, which can affect the brain.

Recently, scientists from the University of California, Los Angeles did a study on teenagers’ brains while using Instagram and their first study said, “A certain part of the brain associated with rewards hums with activity whenever teenagers see one of their photos earn a lot of likes.”

Hearing the sounds of a notification popping up from a phone will make a teen tempted to look. It’s not just the ‘ding’ that alerts them, but it can also be who it was from and what social media it came from. Although, Instagram can make someone feel left out when scrolling through photos of all their friends hanging out without them.

Jacqueline McGuinness, a student from Ralston Middle School, said, “On Instagram when I see my friends hanging out in a picture they posted, it makes me feel like I should be there, but I wasn’t invited.”

Social media has made everyone too involved on their phones rather than reality; people should take long breaks away from their devices and enjoy the real world.

Malala Yousafzai, children and women’s rights activist who made history as the youngest Nobel Peace Prize Winner at age 17, said to The New York Times, “What is interesting is the power and the impact of social media… So we must try to use social media in a good way.”