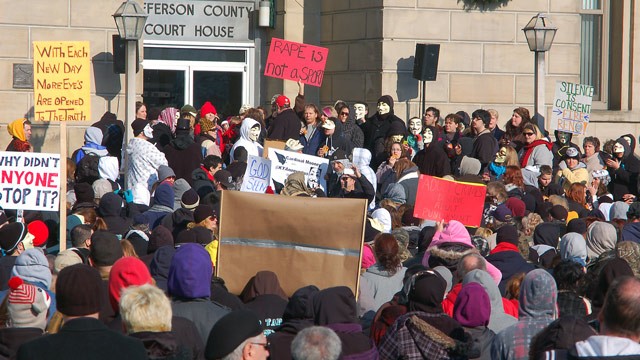 Recently, the issue of rape culture has been brought to light, with the beginning of the Audrie Pott trial and the events that occurred in Steubenville.

In Steubenville, Ohio, a 16-year old girl was raped by two high school football players after passing out at a party last summer. By using their cell phones, those who attended the party were able to spread a video of the events which also included crude background commentary.

Audrie Pott was a San Jose teen who committed suicide last year after being allegedly assaulted by three of her male classmates. She, like the girl from Steubenville, was also at a party and later passed out due to intoxication. She later realized that a photo was circulating around her school with an inappropriate image taken of her. Both of these instances occurred last year and are just now resulting in legal consequences.

With the dawn of social media and the rise of technology, it has become easier to combine cyber bullying with other types of assault. The line between consensual sex and sexual assault has been blurred as a result.

Sometimes an event can seem like it is not sexual assault. “Someone was intoxicated,” “it wasn’t really sex,” or even “they were asking for it,” are just a few of the common excuses that can be found to explain why assault can be confused as innocent behavior.

Some students believe that rape is not a problem at Carlmont. However, a few Carlmont students anonymously responded to a poll and explained that in their opinion rape can be the victim’s fault if “they are oblivious to their surroundings and under the influence” or “if the girl puts herself out.”

According to Merriam-Webster, rape is “unlawful sexual activity and usually sexual intercourse carried out forcibly or under threat of injury against the will usually of a female or with a person who is beneath a certain age or incapable of valid consent.”

Rape is forcing someone to engage in sexual activity, regardless of if he or she is intoxicated or putting himself or herself out there. A common misconception is that forcible sexual activity is not rape if the victim is dressing immodestly or flirting with people.

Even though the definition of rape may be clear, it may still be hard to distinguish exactly when it is an appropriate time to report someone or say something.

“I hear cases where girls are too afraid or embarrassed to say something about what happened and sometimes people need someone to advocate for them,” said senior Quinn Haaga.

It may be difficult to come forward and report an instance of sexual assault or rape, especially if the situation is unclear. However, junior Kiana Ghazouli explained that “it doesn’t matter if someone gets in trouble for doing something wrong. If someone is put in harm’s way physically, verbally, or emotionally, their well-being is more important than the reputation of the person who committed the crime.”