Sophomores gear up for the 2019 powderpuff season 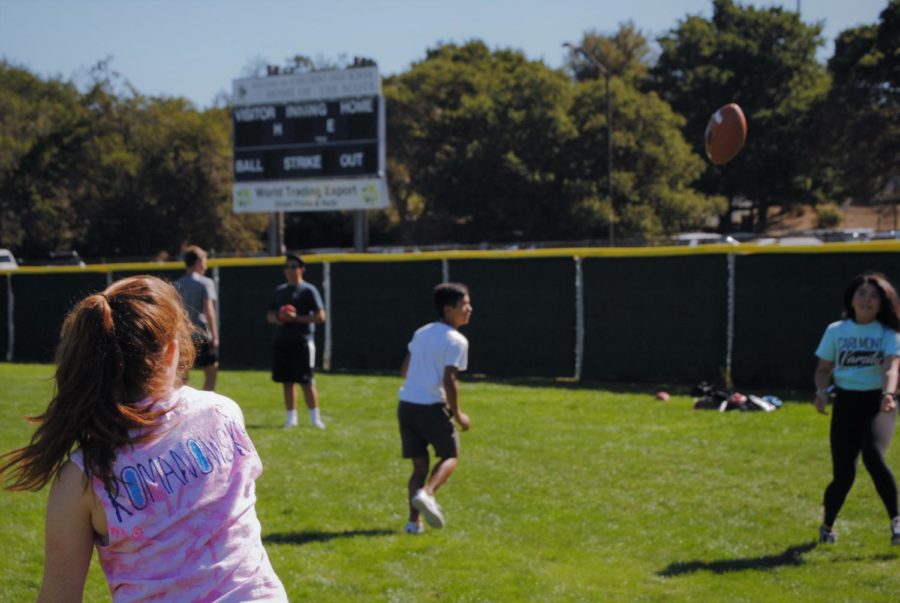 Player Lexi Romanowsky throws the football to Sophia Reyes on Saturday, Oct. 5. Romanowsky has been practicing her throws for the upcoming tournament.

After two crushing defeats in their first year of powderpuff against the classes of 2019 and 2020, the “Swaggy Sophomores” have returned with newfound determination and the need to redeem themselves. Despite a low turnout to their first practice, the sophomore powderpuff team is confident in their ability to win.

Although powderpuff may seem like just a Carlmont tradition, it began at Eastern State Teachers College in 1945. There weren’t enough males enrolled in college following the end of World War II; however, instead of canceling Homecoming festivities, the girls played in the football game instead.

The tradition lives on today and although boys can’t play in the tournament, they can help coach and cheer on their teams.

“It’s important because it’s a low risk, fun event for anyone that builds up spirit for homecoming week.” said assistant coach Charles Tocatlian. “It’s easy for everyone to get involved.”

Head coach Jono Sison is optimistic about this year’s team and is confident in their potential.

“The other teams need to watch out for our team because we’re good,” Sison said. “We have the best chemistry out of all the teams and when it comes down to the game, we’re going to play the best together.”

Just like their coach, most of the players have high hopes for their performance in this year’s powderpuff tournament and are confident in their ability to improve from last year.

“We’re pretty solid, but practice makes perfect, obviously. No one’s going to be perfect. I definitely have some work to do. But overall, I think we all work well together. The coaches are pretty good, you know?” said Jordan English, a sophomore powderpuff player.

Although they’ve only held one practice, the team chemistry is already beginning to build. Likewise, Sison has made it a point that practices are not only for improvement but also to hang out and have a good time. For example, after practice, a group of players and coaches went on to have lunch at the shopping center together.

“We didn’t have that many people show up, but the people that did show up put in a lot of good work. A lot of girls had fun, which was the main priority of these practices, learned a couple of things about football, and we all kind of bonded,” Sison said.

They play their first game against the class of 2020 on Monday, Oct. 21 during Homecoming week which will serve as a rematch and chance for redemption.

“You got receivers, running backs, cornerbacks. You got all the backs. Those other classes better watch out because our team was packing it this year,” Sison said.