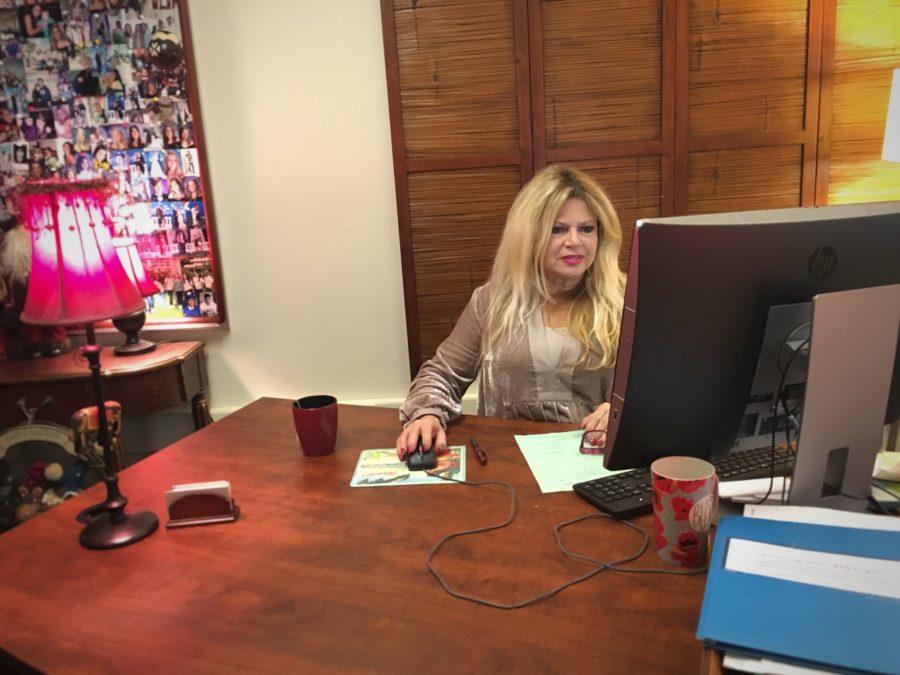 SOS Coordinator and School Therapist Shelley Bustamante prepares for the day ahead, surrounded by photos of past SOS members. Her office serves as a place for her to meet with students and SOS members alike.

The first thing most students will notice when entering Therapist and Students Offering Support (SOS) Coordinator Shelley Bustamante’s office are the overwhelming amount of photographs of students that cover the wall: senior portraits, prom photos, and class pictures.

These photos are of students who have made a huge impact on their fellow students by being a part of SOS, a peer support program.

SOS provides Carlmont students a safe place to receive guidance from their peers.

“There are a lot of kids here who need support for issues that they can’t go to talk to their family about and they don’t have someone they feel comfortable talking to. They can just come here and know that it’s just confidential and we won’t judge them or anything,” said sophomore SOS member Catherine Lundien.

SOS is based on the idea of Positive Peer Culture (PPC), where students have to hold each accountable while they commit to helping their peers. According to The California Evidence Based Clearinghouse for Child Welfare, PPC demands responsibility, rather than obedience, which in turn empowers youth and eventually leads them to give up any hurtful behaviors.

“I think it is immensely beneficial when schools have programs to train peers to help other peers. Not all schools have those programs,” said Therapist and CEO of Treatment Consultants LLC Karen Odell-Barber. Odell-Barber’s company specializes in case management for behavioral health and crisis intervention.

In times of trouble or crisis, children and teens are traditionally told to go to a trusted adult. SOS is unique because students are able to talk to a peer, rather than an adult.

Through peer support, students can talk to people who have been through similar situations as them.

“By going to other people, you get ideas from different experiences, and maybe they have experiences that are similar that they can help you with. I think it it’s better to go to someone who is your own age than someone who is older because they understand more about how you’re feeling,” said Sarah Selman, a junior.

Since it began in 2001, SOS members have helped many students deal with the transition from middle school to high school, along with other issues students may face.

SOS members are students from grades nine through 12, who meet with students, do peer mediations, and can just be a friendly face for students in the halls.

SOS members often use their own experiences to help other students who may be going through similar situations.

“There’s a significant number of kids who are willing to put things that have hurt them personally out there so that they can help others,” said life skills and history teacher Jaime Garcia.

Students who join SOS also find comfort in knowing that they are not alone.

“I came here and I kind of realized that everyone else has these kinds of issues, and I found this group where everyone was kind of really open and friendly,” said SOS member Lillian Gowen, a senior.

PPC has also had big impacts on the Carlmont community.

“We have not had a suicide of a Carlmont student in more than ten years. Part of that is because people know there is a place to go and talk,” Bustamante said.

According to Mental Health Connection of Tarrant County, more than 10 percent of youth age 17 and younger reported five or more exposures to violence. But, Carlmont might have the upper hand in preventing violence through the resources offered by SOS.

“The amount of violence, even just down to fighting, has been reduced significantly over the years and I think SOS has a big, big role to play in that,” Garcia said.

“I’ve seen [SOS] help a lot of freshmen who have a hard time adjusting to the high school environment and they have trouble making a lot of friends. I know when they come here, they find support and see that they have friends here,” Lundien said.

While SOS is open to any student to join, those who do join are able to change the lives of others forever.

“What I think makes SOS different from other groups is that these are kids that are sharing things that most people are afraid to share. Not only is it healing them, but it’s healing others and it’s giving others permission to talk about things in the past that were kept behind closed doors,” Bustamante said. 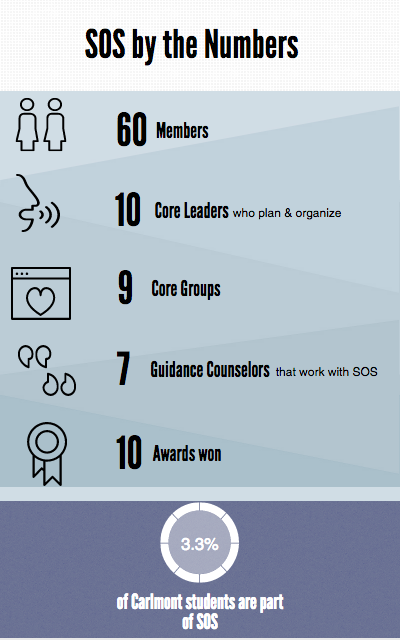