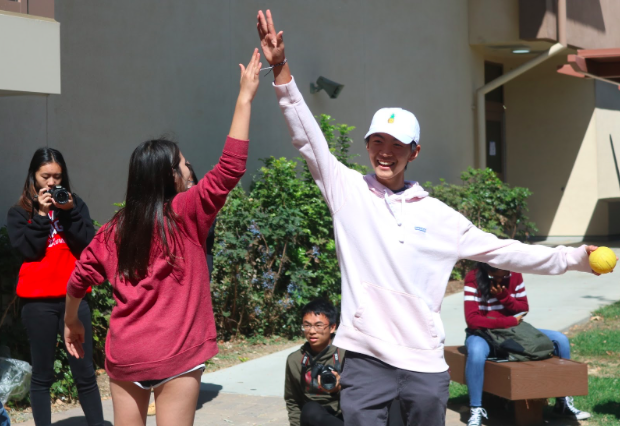 Members of Associated Student Body (ASB) strive to make Carlmont a better place through the spirit and service they bring to the student body, and they have fun doing it. ASB is a close-knit family and bonds in many ways, including bonding trips or games like spikeball.

According to Spikeball HQ, spikeball consists of a small, round net and ball, and players traditionally play it in teams of two. People describe it as a combination of volleyball and four-square, two familiar recess games often played in elementary and middle school.

Members of ASB take out the net and ball whenever they can and play at lunch, after school, or in their free time outside of school.

However, spikeball wasn’t always around at Carlmont — this summer, several members of ASB discovered the game. Aidan Dimick, a sophomore, is one of the students in ASB who is known for starting the spikeball craze at Carlmont.

“I started playing spikeball last summer when I discovered it with my siblings. I really like it because it brings you closer to the people you play with and makes it easier to collaborate [with other members of ASB] for other things later on,” Dimick said.

The main benefit of playing spikeball is that it brings students together through lighthearted competition. Sophomore class president Jono Sison is another member who partakes in the many spikeball games at Carlmont.

“I think the game itself is beyond ASB at this point because we usually set up in the quad, and it’s gotten to the point where not just kids from ASB are playing. There are other kids from different parts of the school and different kinds of groups who have started playing,” Sison said.

Spikeball at Carlmont is an inclusive social activity that does not require skill or prior experience. All students are encouraged to participate, regardless of their abilities.

“Spikeball gives me a chance to socialize with my friends at lunch, and since we let essentially anyone play, it can be fun just to rally the ball with people we don’t even know,” Tocatlian said.

As well as bringing students together, the game of spikeball also allows them to have fun and momentarily forget about the daily stresses of school.

“A big thing about high school is that we don’t have time to play anymore. Spikeball brings back that aspect of relaxing and being worry-free while we are playing,” Sison said.