Spill the Tea is amazing, period 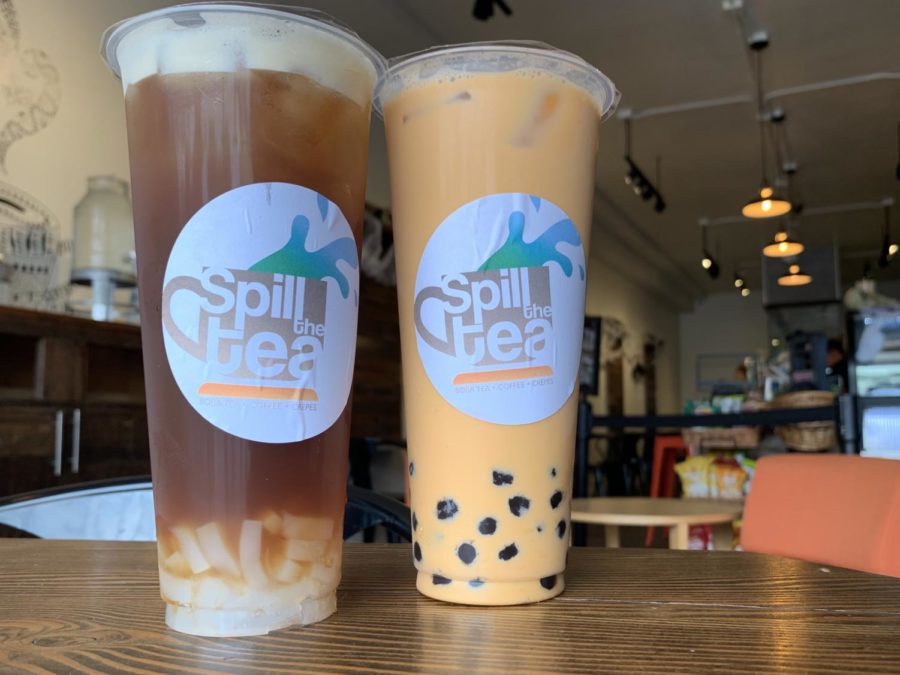 The lychee mania and the Thai tea are both phenomenal drinks.

Hearing that there was a new boba place in Redwood City called Spill the Tea made me think of all the memes regarding James Charles and Jasmine Masters and everything in between.

When I walked in, the whole shop was decorated with fake spider webs, lights, skeletons, and other Halloween decorations. The fall decor was warm and welcoming.

I was also surprised to see that there wasn’t a line. It was around 3 p.m. on a Saturday, so not exactly “prime boba time.” Compared to the seemingly never-ending line of Boba Guys or T-Pumps, the emptiness of Spill the Tea was refreshing. I figured it was because of the fact that it was new and not exactly in a prime location.

The menu was written on a large chalkboard on the wall of the shop. It was easy to read and featured cute little drawings.

Along with boba, little snacks and pastries could also be ordered. I wanted some mochi ice cream, but unfortunately, they were all out. I ended up ordering two drinks, the lychee mania and the Thai tea.

After picking up the drinks, the barista told me that if they were too sweet or too sour, I could just let them know and they would fix it. I have not heard this at many places before.

The lychee mania featured black tea with lychee flavoring and lychee jelly. Lychee is one of my favorite flavors for boba, and Spill the Tea did not disappoint. The two complaints I usually have with lychee tea is that it is either too bitter or, if there’s no lychee flavoring, just sweet. However, this was not the case here. It had a distinct sweet lychee flavor and was delicious. The lychee jelly had the perfect texture, and it was not too big or too small. It was one of the best lychee drinks I’ve ever had.

As I’ve said in a previous review, Thai tea is usually not one of my favorites. However, Spill the Tea’s was different. The tea had a rich flavor, filling me up instantly. It was not too sweet, but it also wasn’t bland. The milk enhanced the tea flavor in a harmonious blend. The boba inside wasn’t anything special, but it certainly didn’t take away from the drink.

Overall, Spill the Tea was a gem. I hope it takes off because their boba is fantastic. I look forward to coming back and trying everything they have on the menu.

And that’s the tea, sis.