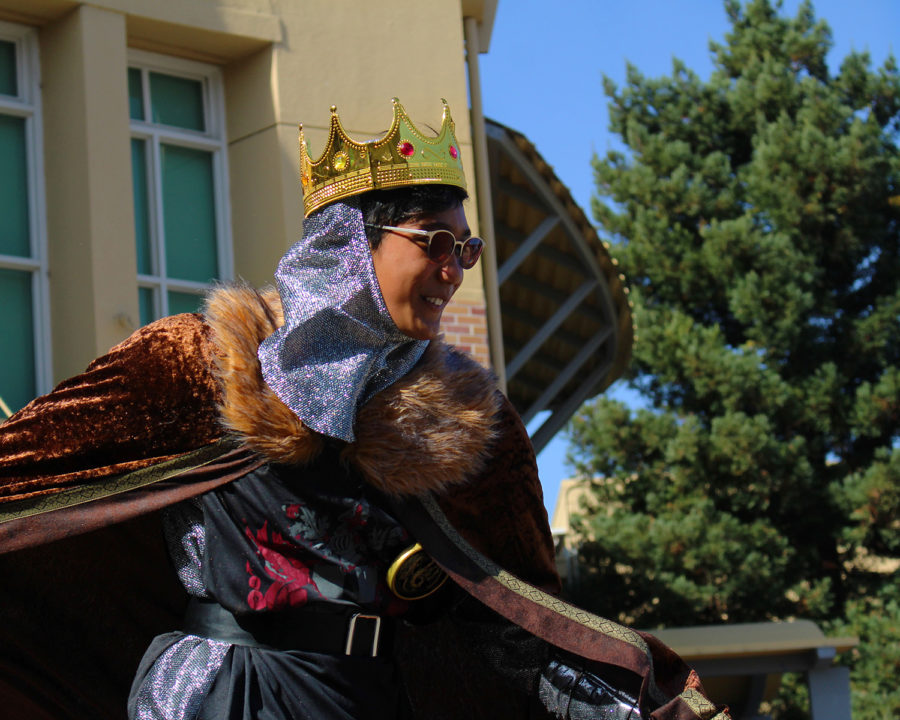 Jay Jorge parades around the quad, showing off his costume, full of Halloween spirit.

Ketchup, mustard, the whole Mystery Gang, and the cast of Napoleon Dynamite: all things one would find at Carlmont’s annual costume contest, exciting both the students who were participating and those who were watching.

The contest took place on Oct. 31, highlighting student creativity and Halloween spirit. Students that dressed up came to the quad to compete in the contest for the prize of a Carlmont t-shirt.

Students paraded around, displaying their costumes and putting on a performance for the judges. Even if students didn’t win, the costume contest was a fun way to celebrate their costumes on the once a year holiday.

“The best part about participating was being able to have fun with it. The full embodiment of the characters with accents and the acting allows you to have that perfect portrayal, and to really wow the judges,” said Joe Seaman, a senior, who was dressed as part of a “Napoleon Dynamite” group costume.

“I was really impressed by the number of group costumes, I think it’s neat that they planned it together,” said Andy Ramroth, a costume contest judge, and math teacher at Carlmont.

This year, many students attended the contest, filling the quad while they watched in awe. Many noticed the imagination of their peers and cheered as participants walked down the runway.

“It was amazing to see the clever costumes, and how much effort each person put into them, as well as the performance along with it. The contest was entertaining and fun to watch, and I think that these are some of the traditions that really capture the spirit of Halloween,” said Jono Sison, the sophomore class president.

All of the thought and effort put into the “Napoleon Dynamite” group costume paid off when they won the costume contest and received their Carlmont t-shirts.

“They won because they came in character, and had many good lines when using the microphone. They definitely embraced their characters, which made their costume the best,” Ramroth said.

“People always tell me I look like Napoleon Dynamite, so I dressed up as him in fifth grade, but I wanted to do a more elaborate design this year, so we based our group costume around the movie,” Seaman said.

Seaman’s friends Andrey Zaytsev, Adam Fox, and Keyan Madani all worked together to become the characters by creating the costumes and acting like the characters.

“We wanted to have accents from the movie, so we watched it together a bunch of times until we had the accents down,” Zaytsev said.

The team felt that dressing up and diving into the character through acting and jokes is what makes Halloween the most fun it can be.

“It’s the only day of the year that you can dress up, so why not go all out?” Zaytsev said.