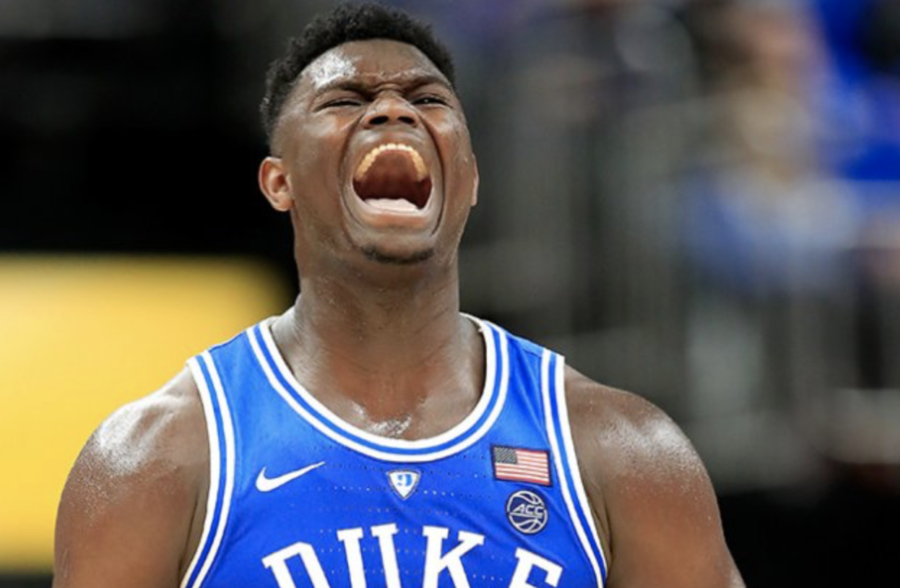 Zion Williamson, a freshman at Duke University, is the projected number one pick of the 2019 NBA draft.

It is Duke basketball’s most hyped game of the season.

They are taking on University of North Carolina at Chapel Hill, their biggest rival, at home.

Spectators flock the stands, including former president Barack Obama. They are all dressed in blue and white, ready to support their team.

However, the main attraction of the night is Zion Williamson, the projected number one pick for the 2019 NBA draft.

Entering the contest, Williamson is averaging 21.6 points, 8.8 rebounds, and 2.2 assists per game for the Blue Devils. His efficiency rating, natural athletic abilities, and large size make him a top prospect for the NBA.

Surprisingly, Williamson is only a freshman.

In the opening seconds of the game, he starts to dribble towards the basket when something strange happens, his shoe rips. Williamson lands awkwardly and injures his knee, with the severity of the injury initially unclear.

Suddenly his future in the NBA, the bargaining agreement of 2006, and the monetary rules of the NCAA are drawn into question.

Williamson was likely a “one and done” player meaning that he would only attend Duke for one year before entering the NBA draft.

This is because of the rules that were set up in the bargaining agreement of 2006. The agreement ruled that all draftees must be 19 during the calendar year of the draft and also be one year removed from high school.

This has created a culture of top prospects attending college for only one year. Players such as Kevin Durant and Kyrie Irving left college for the draft after their freshman year.

Prior to 2006, draft prospects had the option of entering the draft straight out of high school or going to college. This gave them the power to decide for themselves whether or not they felt ready to enter the professional league, instead of being forced to wait.

Other notable players who entered the draft directly after high school are Kobe Bryant and Kevin Garnett. Bryant, Garnett, and James all went on to earn at least one all-league MVP, an all-star selection, and a championship ring.

These player careers indicate that age is not a fair indicator of readiness and should not be held against players. If Williamson felt ready to enter the draft, he should have been allowed to enter it.

Following this injury, there has been lots of speculation regarding Williamson’s playing time for the rest of the season. If he recovers, should he play and help Duke try to win a championship? Or should Williamson rest for the remainder of the season to prevent future injury?

There has been a lot of support from current NBA players such as DeMarcus Cousins and Isaiah Thomas for Williamson to stop playing for the remainder of the season. However, at this point, it appears that he will return following the injury.

A few days after the game, Mike Krzyzewski, Duke’s head coach, said, “He wants to play. He loves being at Duke.”

Although Williamson enjoys playing with the team, according to his coach, he may not enjoy how much the NCAA profits off of him.

According to ESPN, one ticket to this week’s UNC-Duke game sold for $10,652, per Vivid Seats. This statistic was featured in the article headlined: “UNC-Duke tickets approaching Super Bowl prices because of Zion Williamson.”

Williamson is the reason for these extreme ticket prices, yet he isn’t being paid to play. The NCAA is unfairly profiting off of college athletes, who are not allowed to be compensated for their work on the court. Although college athletes can be offered large or full tuition scholarships, they are unable to be paid like they would in the NBA.

Not allowing basketball players to enter the draft out high school benefits the NCAA. They are able to make a profit off of the players that are forced to wait a year before entering the draft. The current rules of the NBA draft benefit the NCAA, but they are unfair to the players.

These rules regarding the NBA draft have been a topic of conversation as of late, but become more prevalent following Williamson’s injury. On Feb. 21, the NBA formally proposed changing the draft-eligible age requirement from 19 to 18 to the National Basketball Players Association.

Now the decision is up to the Player Association, and the Williamson incident will likely play a role in their decision making. They must now decide whether to restore the old system, where players such as Bryant and James could start playing straight of high school, or continue to force prospects to attend college for a year, where they are susceptible to injuries and aren’t being paid.

In the end, it took one fall and one torn shoe to highlight the faults of the current draft and the corrupt nature of the NCAA. However, these problems can be fixed if the NBA decides to lower the draft requirements. This would end the silly “one and done” culture and give prospects power over their future.