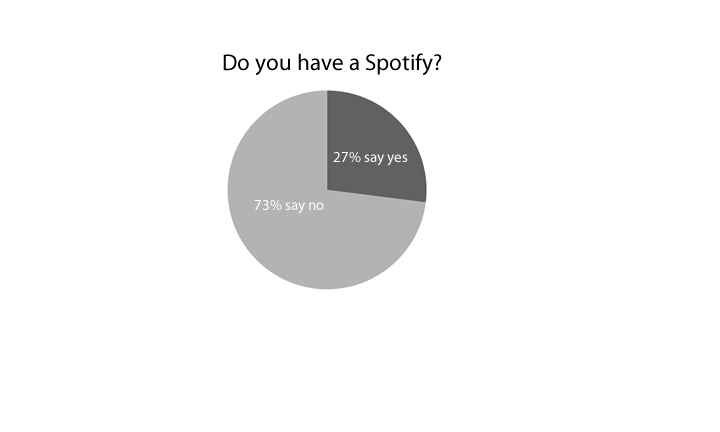 Students at Carlmont have found a new music streaming service called Spotify that allows its users to listen to any of the over 15 million available songs.

Most Spotify users access their accounts through Facebook. This allows them to share music with their friends by posting their favorite tracks on Facebook. While scrolling through a person’s news feed on Facebook, all a person has to do is click on the play button on any of their friends’ music posts.

Users can share music through Twitter, Microsoft messenger, and Spotify itself. Matt Wood, senior and Spotify user, commented, “I use Spotify sometimes to share music with friends because it’s easy.”

Spotify opened in October 2008 by a Swedish start-up company, Spotify AB, by founder Daniel Ek. Originally available in only a select few countries, Spotify is became available to the United States in 2011.

When Spotify was just starting up, in order to manage the growth rate of the service, people could only access Spotify one of two ways.

They could either pay for a subscription or get a free account but only if they were invited by a member. It wasn’t until recently that Spotify Free was made accessible to the public in the United States, as a result of a deal between Spotify and Facebook.

Many Carlmont students are currently enjoying their free subscriptions to Spotify, evident by the track-sharing on peoples’ news feeds. However, they might not realize that the amount of music they have access to right now will not continue indefinitely.

That deal between Facebook and Spotify not only allows the site to go public, but it also lets their users sync their two accounts together. It also guarantees that any Spotify user that makes an account through Facebook will get six months of unlimited music from Spotify’s music catalogue.

But after the first six months are over, users will be restricted to only 10 hours of music listening per month and they will only be able to listen to any one song five times.

Melissa McCormick, a junior at Carlmont, explained, “Those restrictions are ridiculous, like I didn’t even know that they were coming. I don’t know about other people, but when I like a song I’ll listen to it more than five times in a month.”
If a user is willing to pay for their Spotify subscription, they have two options. The first is paying $4.99 a month for Spotify Unlimited. This would eliminate the restrictions mentioned above.

But, if the user is willing to pay $9.99 a month, they can upgrade to Spotify Premium. With Spotify Premium, the user is able to enjoy as much music as he or she wants, without any restrictions and without any advertisement. Perhaps the biggest difference though would be that they would be able to use the Spotify application on their mobile device.

Spotify will even allow its users the enjoy one month of Spotify Premium for free as a way to convince them to subscribe.

For those who decide to try the one-month free promotion, be aware that after the first month is over, a monthly service charge will be issued unless the user unsubscribes.

“I wouldn’t pay any money for Spotify,” explained Wood, “There are lots of other ways to listen to music that are free and easier.”

Although Spotify may be a great music streaming service with millions of songs available to its users for free, once its restrictions set, it seems that many people will return to downloading their music illegally.