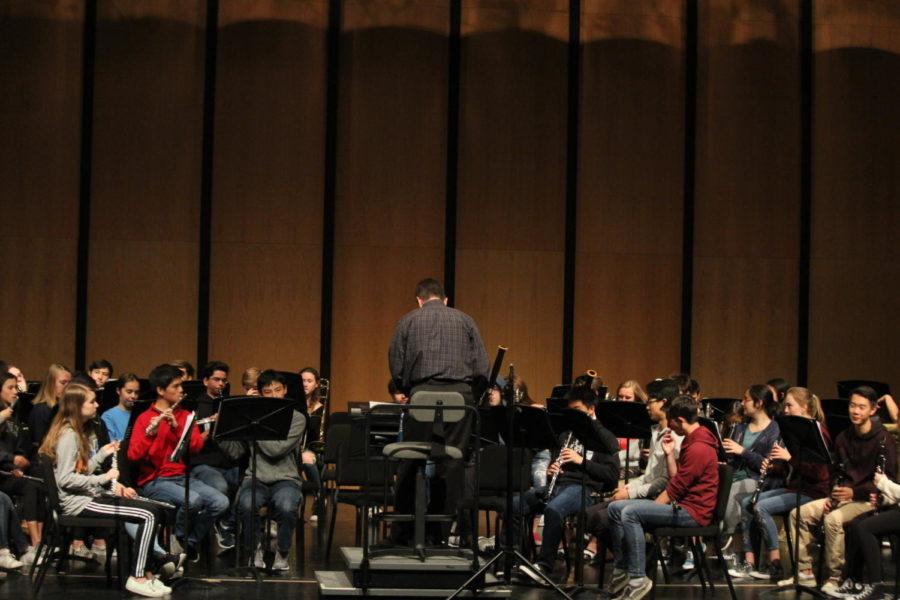 Symphonic Band rehearses in the Performing Arts Center before their performance.

Parents and students shuffled in the Performing Arts Center (PAC) last Wednesday to attend the first night of Carlmont instrumental music’s Spring Concert series, in which the jazz ensembles and jazz combos perform.

This is one of three shows that is being put on by Carlmont instrumental music.

“In class, you may get varying degrees of effort,” Assistant Instrumental Musical Director Brian Switzer said. “But when it’s concert time, students give 150 percent, and the music sounds great.”

The Spring Concert is the instrumental music program’s second concert of the year, the first being the winter concert.

“In a sense, this is a culmination of a year worth of work,” Switzer said. “These groups have been together since September and have been working on this material since January.”

Students are expected to practice at least 2 hours per week, with some students practicing up to and above 6 or 7. Some students, like Jenna Williamson, a senior, are even part of multiple performances.

“I initially didn’t know how demanding it would be,” Williamson said. “But I stuck with it because I enjoy the rigorous practice and seeing all the pieces come together.”

For Williamson, as well as many other seniors, this is their last concert as a member of Carlmont instrumental music.

Other students, like sophomore Isaac Troy, enjoy the community within Carlmont’s music program.

“The sense of comradery that is provided by this class is a definite highlight,” Troy said. “I also enjoy that it’s a class where I don’t have to sit at a desk for an hour to do my homework.”

The first night was well attended. Some notable songs included “All of Me,” “April in Paris,” and “Misty.” In general,  the audience reacted positively to the performances.

“The Jazz Ensembles were really fun to listen to,” freshman Jaden Cheng said. “In particular, the soloists were amazing.”

“The Spring Concert series is a really great opportunity to experience a big part of Carlmont culture,” Switzer said. “I hope people get a chance to see it.”