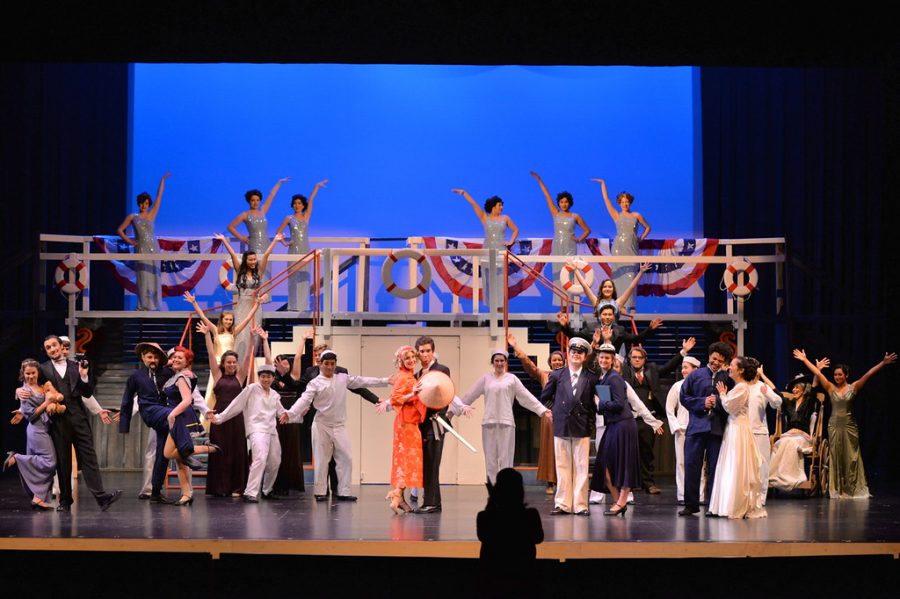 The cast members of "Anything Goes" pose onstage during the final scene as they receive applause.

The Carlmont spring musical, “Anything Goes,” held its opening night on Feb. 9 and ended with its last showing on Feb.12.

Directed by Stephanie Maysonave and produced by Genevieve Tep, the musical gave Carlmont students of all grades the opportunity to display their love of performing to their families, friends, and fellow peers.

The story took place in the 1930s aboard an American ocean liner where relationships between six different characters unfolded.

“I really enjoy being part of the musical,” said Jason Zheng, a senior who played John the Chinese convert. “I’ve been doing it all four of my years in high school and I keep returning because of the energy I get from singing and acting onstage.¨

Students with other artistic and technical skills also helped make the production possible.

Nineteen of Carlmont’s band and orchestra students played music from the pit to go along with the acting on stage.

“I joined [the pit] because the music teachers really encouraged me to. The music also sounded cool and I had tons of fun playing it for the audience,” said sophomore trumpet player Jayla Chee.

Directed by Rick Reynolds, the band performed songs from the composer Cole Porter, including “Blow, Gabriel, Blow,” “It’s De-lovely”, and “You’re the Top.”

“I learned so much from helping out with this musical. This facility is bigger than the others I’ve previously worked at and it was a lot of fun making the show come to life,” said freshman Andres Raddavero, an usher at the event.

Also included at the venue was a concession stand selling snacks before and after the musical and during a fifteen-minute intermission.

This year, the musical attracted a large audience, which included many Carlmont families.

Carlmont parent Laura Parks said, “I’ve been attending Carlmont musicals for six years. I like supporting the young people and their talent, and the pit orchestra always does an amazing job. I admire how much work goes into the production, so it’s great seeing the final product in the end.”

The performances as a whole were successful according to Zheng, who said, “The thrill you get from seeing something you worked so hard on be enjoyed by so many is my favorite part!”