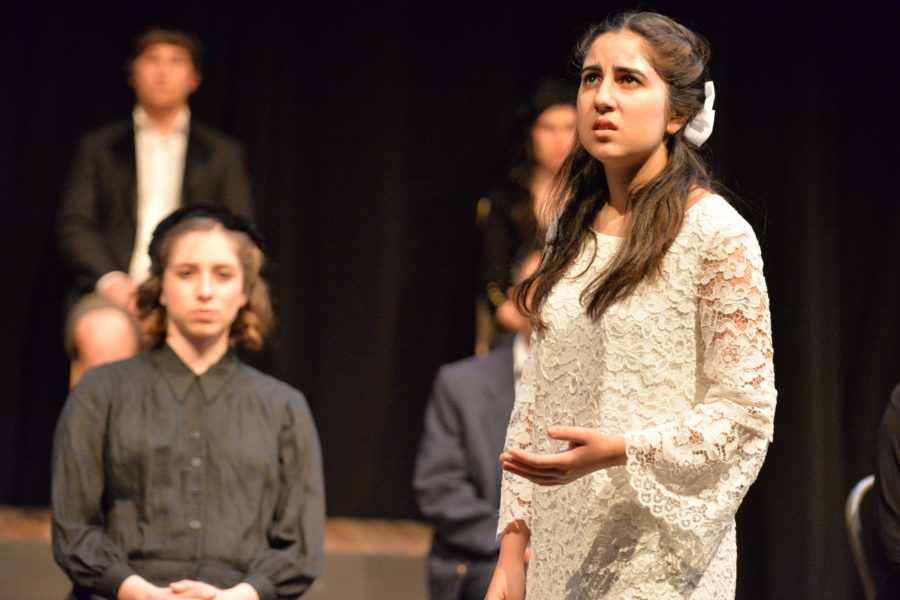 Salma Sebt, a junior, played Emily in the Spring Play, “Our Town,” by Thornton Wilder. She said, “The viewpoints that people have on life are different and there’s certain parts of life that we can’t go back on because, well, the past has happened and life just goes on."

The barista looks up, smiles, and hands a cup of steaming coffee across the counter. The fragrance is pleasant and the warmth is comforting. Each small sip brings a burst of flavor and a mind-opening energy boost. The room is lively and bright, the coffee is good, and the day is just beginning.

This scene is quaint, pleasant, and all too unfamiliar. While the experience of drinking a cup of coffee in the morning may be routine, the slow savoring of these little pleasures is regretfully uncommon in today’s life. In many ways, it has been replaced by rush hour and distracting cell phones.

However, Carlmont’s spring play, “Our Town,” by Thornton Wilder, sets out to remind viewers of these moments and to appreciate them. Carlmont Drama performed the play from April 2o to April 23.

Jasmine Zang, a junior, who played Mrs. Webb, said, “It’s about enjoying the small moments in life. The everyday things.”

“Our Town” is a three-act play that takes place in a small fictional New Hampshire suburb, called Grover’s Corners, and tells the story of growing up and finding love. However, it is much more than the implied cliche—it not only focuses on a young couple and their families but also on the cycle of life and the everyday existence of their fellow townspeople.

Zang said, “I’m hoping that on the car ride home, [audience members will be] thinking that we did a good job portraying an everyday life and that they get a feeling of nostalgia.”

According to the Thornton Wilder Society’s website, the sparse and symbolic qualities of the set suggest Wilder’s intention to make Grover’s Corners represent all towns.

“Rushing in the morning to get ready, or going to a wedding, or feeling the sadness at a funeral,” Zang said. “There’s something in the show that everybody can relate to.”

The lack of props and set allows the viewer to fill in the setting with their imagination, which makes the play seem even closer to home. In contrast, the costumes included a wonderful array of 1950s era clothing and hats. In the production, there was even a wedding dress that is from the 1950s.

Salma Sebt, a junior who wore the dress for the play, said, “I feel really privileged. It brings me joy that I get to wear it.”

The play was originally set at the turn of the century but has been re-imagined in a 1950s setting to give the play more relevancy in today’s society.

Sound effects, some included in the script and some added in during production, drew the audience further in and played off of the connotations of familiar sounds like a train whistle in the distance or chickens clucking.

Another clever element of the play was the use of small bluish lights as stars, which brought a touch of magic to the set at the close of the play. In addition, the Stage Managers were able to break the fourth wall or speak directly to the audience.

Julia Clark, a junior who played a Stage Manager, said, “It didn’t really feel like I was in a show because I was talking to the audience and not pretending they aren’t there, which is how a show normally works. It was weird and jarring at first but then it was fun.”

The sparse stage, rich costumes, engaging sound design, and unconventional theatrical devices made for a memorable show. In fact, it won a Pulitzer Prize for Drama when it was first performed in 1938.

Assistant Director Chesirae Barbano said, “Our director, Emily York, acted in this production when she was attending Carmont and she just fell in love with it.”