Staff votes ‘no confidence’ in superintendent 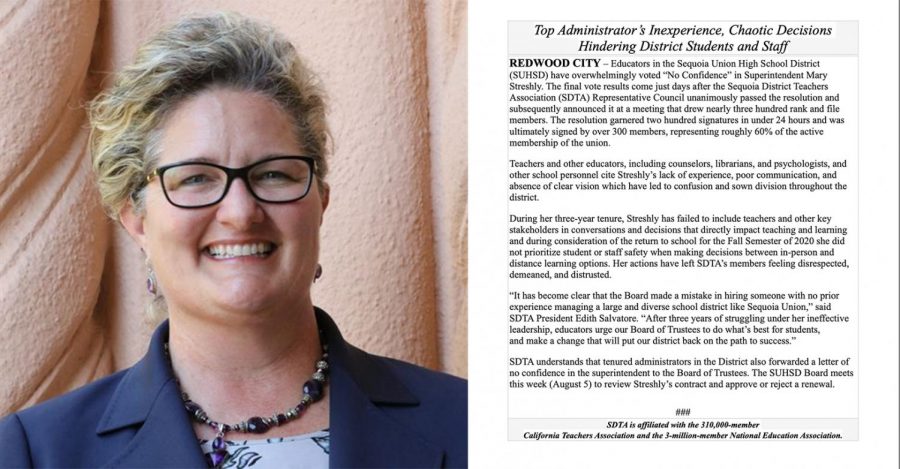 Teachers and administrators from the Sequoia Union High School District issued a Vote of No Confidence against the superintendent as they question her trustworthiness and actions as a leader of the students, staff, and community.

A “Vote of No Confidence” occurs when a person in a leadership position is believed to be making decisions that are not in the best interest of others. With the SUHSD superintendent, that was alleged with her decisions regarding returning to school amidst the COVID-19 pandemic.

“Essentially, a Vote of No Confidence is a measure that a group (in this case, the teachers, counselors and other certificated employees of the district) takes to indicate that they no longer have confidence in their leadership,” said Edith Salvatore, president of Sequoia District Teachers Association (SDTA).

The vote itself is a document that outlines the concerns of leadership, according to Carlmont teacher Genevieve Tep.

“It’s a really serious matter and something that is only initiated when there are major issues,” Tep said.

SDTA is led by a governing board of members representing each school. Their duties include negotiating, benefits, salaries, and ultimately decided to invoke the Vote of No Confidence.

The process began on July 27, as the five members of the elected executive board met to discuss their concerns. Following this, they brought their concerns to the legislative council’s attention. The Legislative council consists of members representing each of the sites and the district office, and they unanimously approved the vote.

“We then had a general meeting where we had about 300 people attend via teleconference, and we explained the reasons that we had gotten to the point of no confidence and shared the resolution that the legislative council had come up with,” Salvatore said.

A form was then sent out to the “rank and file” members, who are any members of SDTA that are not elected officials.

“Hundreds of teachers signed, and the administrators of the schools and at the district office also sent their own letter echoing the union’s concerns,” Tep said.

The form was active for about a week and received 344 signatures from the union of about 550 members.

Among a list of requests, the form read, “We the undersigned certificated employees of the Sequoia Union High School District hereby proclaim No Confidence in Superintendent Mary Streshly.”

Scot Scoop made multiple attempts to contact Streshly for her comments, but she has not responded.

However, Streshly forwarded an email to the parents that she had initially sent to Salvatore and the SDTA.

“I recognize that SDTA is upset because they believe that I did not defend teachers to parents during the June 4th board meeting … Although I did not vocalize any comments in that moment, I thought we all understood that parents needed a venue to express how they feel, as ultimately until that point, they had not had the opportunity to do so,” Streshly said. “Having said that, (SDTA’s) letter states that as a result, (SDTA) felt that I was not supportive of teachers, and for that I want to take this moment to apologize.”

Ultimately, the union demanded that Streshly’s contract should not be renewed; however, there are other possible outcomes.

“The board could support the superintendent and try and find ways to help improve performance in the eyes of the staff, or the school board can decide to take action to remove the superintendent if they feel that the allegations that the staff has brought forward are validated and egregious enough,” Carlmont Principal Ralph Crame said.

Since the vote, although there have been frequent board meetings, a final decision has not been made.

“At the August 19 meeting, they had decided they needed to hire an independent information gatherer to conduct interviews about the situation,” Salvatore said.

The consultant was given a list of people to contact. As Salvatore said during their meeting, the independent information gatherer asked about specific examples outlined in the press release and if any improvements could be made to work with Streshly in the future.

For staff, the most specific example of the lack of trust in Streshly is her reaction to the pandemic.

“For years, we have had a lack of leadership from the district office; the no-confidence vote was not only about the handling of the pandemic. Communication from our superintendent has always been lacking. Consultants and staff at the district office keep getting hired regardless of the needs at the school sites. And the handling of our pandemic shutdown, and then our reopening process was incredibly confusing, which led to families, students, and staff feeling confused and ignored,” Tep said.

According to Salvatore, in addition to Streshly’s decision to return to school, she caused panic among the staff with the decision for them to go back. That decision was changed a week later, relieving the staff of their alarm.

“Not everyone’s job can be done remotely. The secretaries, the plant managers, custodians have to be on campus, and to a certain extent, the administrators have to be on campus. It is frustrating to us that those people would have to be exposed to dozens, if not hundreds of additional employees that they shouldn’t have to worry about being exposed to,” Salvatore said.

When it comes to Carlmont, there may be no direct effects of the Vote of No Confidence.

“We have our processes in place, and we have everything we need as far as personnel staffing support to continue. If a new superintendent comes in, that could affect all the schools, not just Carlmont, with any initiatives that the superintendent has. If this superintendent stays, there could be initiatives that come out of that,” Crame said. “It’s really hard to tell the effect, but I don’t think you’re going to see a drastic change, I think you’re going to see business as usual, as this process unfolds.”

Salvatore said a possible effect of Streshly’s leadership could be the decision to return to school in the following quarters.

“If she makes the decision and the state says conditions are okay to open schools up, and we send everyone back to campus, then that’s going to affect Carlmont because your campus is going to be filled. That decision is going to be made by someone as to when it’s safe to come back. The superintendent has indicated that as long as parents are pressuring to have kids back, in-person school is going to be her ultimate goal,” Salvatore said.

The staff ultimately holds their goal of removing Streshly from her role in the district and community.

“Although the pandemic response was handled very poorly, these leadership issues have been going on for years. The pandemic simply created a situation where the lack of leadership became even more obvious and difficult. We need clear, experienced leadership now, more than ever,” Tep said.