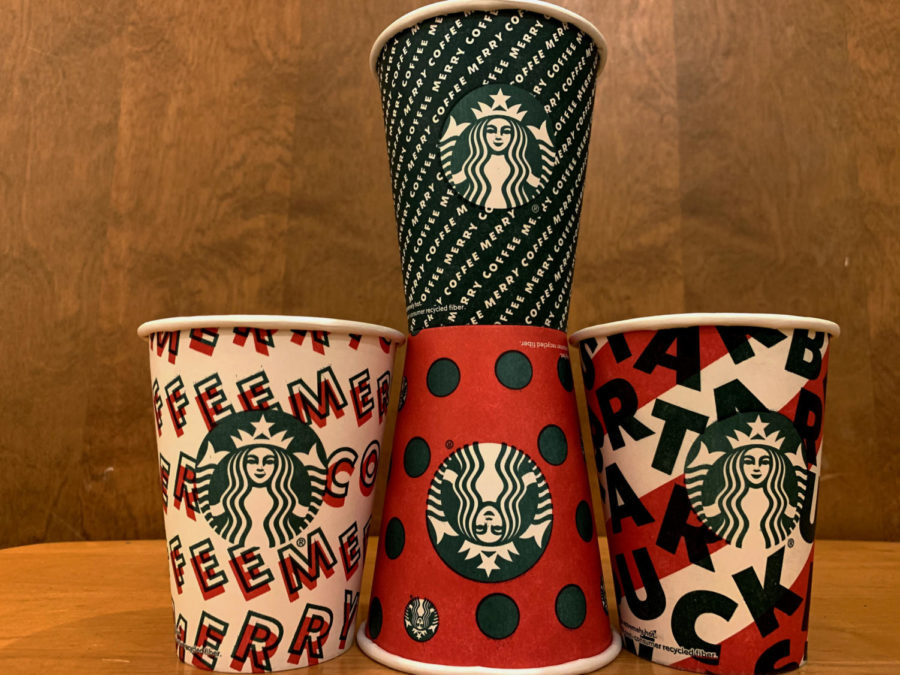 Bold patterns grace the Starbucks cups of the 2019 holiday season. According to Jen Quotson, vice president of Starbucks Creative, the cups are meant to represent “a gift to Starbucks’s partners and customers.”

Starbucks locations across the United States and Canada have started using festively decorated cups in honor of the holiday spirit.

According to Starbucks Stories and News, these designs were released along with seasonal drinks, such as the Peppermint Mocha, on Nov. 7. The designs utilize traditional holiday colors and bold typography to get customers into a festive mood.

Jen Quotson, the vice president of Starbucks Creative, said that the idea of using typography to decorate the cups maintained tradition while being creative.

“We just thought that it’d be a very sweet, but very holiday, expression of the brand,” Quotson said.

In the past, the holiday cup designs have been met with criticism, with customers such as President Donald Trump claiming that they are initiating a “culture war.”

According to the Washington Post, in 2017, angry customers claimed that a pair of hands on that year’s cup was promoting homosexuality.

Sophomore Kevin Bachelor praised the new cups, claiming that they promote the holiday spirit. However, he also noted that Starbucks seemed only to have one holiday in mind when making the designs.

Junior Liana Feigelson shares a similar perspective, noting that Starbucks seems to support Christmas more than any other holiday.

“I think the designs definitely promote Christmas due to the coloring, and they push that holiday ahead of Thanksgiving,” Feigelson said.

The starting date of the holiday season can be a controversial topic. Some people, like Bachelor, believe that it’s never too early to start celebrating.

“There’s really no reason to not get into the holiday spirit … why procrastinate that to a later date?” Bachelor said.

Although Bachelor starts celebrating early, he respects those who choose to begin celebrating later than he does.

“Anyone can celebrate when they want to celebrate,” Bachelor said. “I don’t think it’s really harming anyone.”

However, not all are delighted at the prospect of celebrating early. Feigelson is part of this group, believing that Thanksgiving should come first.

“I would start the holiday season on Nov. 25, a month before Christmas,” Feigelson said.

With the controversy over the Starbucks cups not being cheery enough for Christmas, other religions that don’t see themselves in the designs can feel overlooked. Feigelson noted that if she could design the cups, she would take steps to cater to people who don’t celebrate Christmas.

“I would have different designs that are more encompassing,” Feigelson said. “I would also include the color blue in order to not make the designs all about Christmas.”