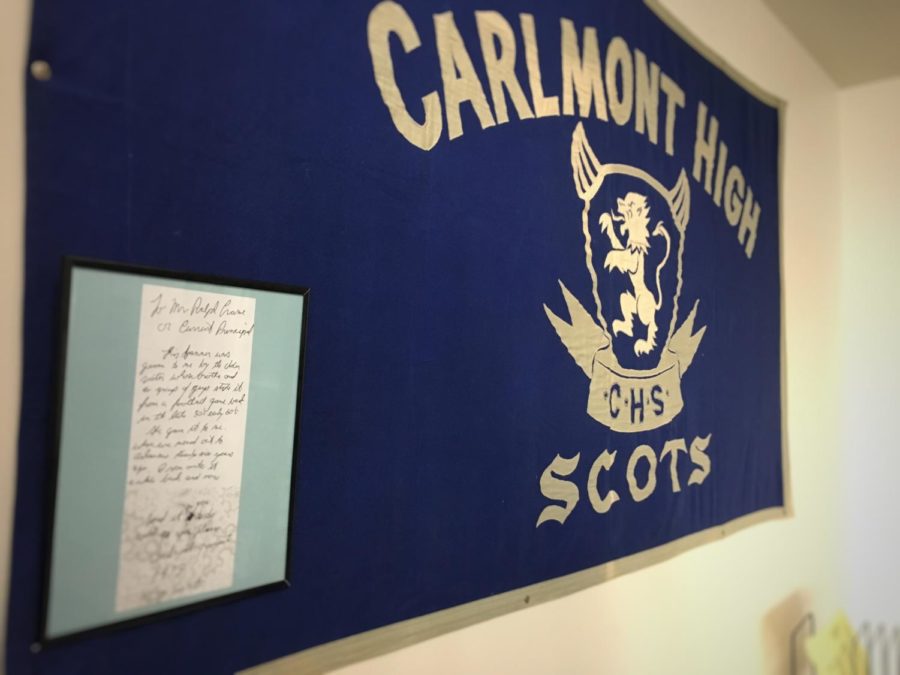 The Carlmont banner from the late 50s/early 60s now hangs in the administration office for all to see. The accompanying note is framed and rests on top of the banner.

The past is the past, and some people, whether they’d admit it or not, would rather keep it that way. However, sometimes it is appropriate to revisit the past in order to plan for the future.

It was a morning like any other. The administration arrived early to begin preparing for the day ahead as students filed into school, ready to learn.

It was on that day, Wednesday, Feb. 7, that Melanie Fuentes, Principal Ralph Crame’s secretary, came across a package addressed to Carlmont High School.

She and Crame opened the box to find a folded-up piece of fabric and a note that read: “To Mr. Ralph Crame or current principal, this banner was given to me by the older sister whose brother and a group of guys stole it from a football game back in the late ’50s, early ’60s. She gave it to me when we moved out to Arkansas twenty six years ago. I ran into it a while back and now send it to you to do with as you please.”

There was no name on the letter, and the bottom was only signed “Carlmont graduate 1973. Go Scots!”

Fuentes did a bit of research using the United Parcel Service (UPS) label of the box and tracked the package back to Richard Pearson who was in fact a Carlmont graduate in 1973. She then sent him a “thank you” note; however, there has been no confirmation that he sent the banner.

“That, I have to say, is probably one of the most unique ways that we’ve gotten something back, especially with the little story that was attached to it,” Fuentes said. “I often do get memorabilia sent back or brought in to the school when they find things, so it’s just a matter of where the people locate them.”

The banner, at least 50 years old by now, was returned to its rightful home and resides on the wall next to Sharon Bologna’s desk.

When Gayle Collins, a docent at the San Carlos History Museum, was informed of the returned banner, she was quite interested.

However, upon further investigation, it became apparent that although people had known about the banner, no one that Collins was in contact with was aware of its disappearance.

Nonetheless, Fuentes was impressed “that it returned to the school after all of these years in great condition and with a fun story.”

The banner isn’t the only artifact that has been returned to Carlmont with a story to tell.

According to Fuentes, Irma Abelt, Carlmont’s registrar, has a brother that found a class of ’69 shirt in a flea market in Mexico and sent it back to Carlmont.

To learn more about Carlmont’s history, visit the San Carlos History Museum, open on Saturdays from 1 to 4 p.m.