Striving for her dream 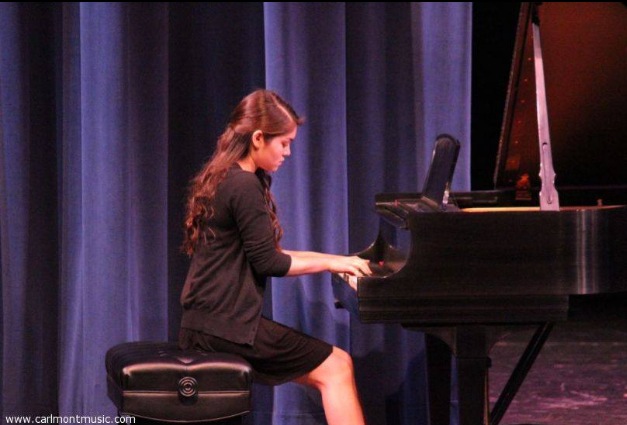 The passion for music is the motivation for junior Christina Galisatus to work hard in maintaining a high GPA and to participate in extracurriculars outside of school.

“I like playing the French horn and the piano equally so right now I’m in the process of deciding which instrument to focus on for a major in college,” said Galisatus.

Currently, Galisatus plays the piano on Carlmont’s jazz band and recently, played the piano in the pit orchestra for Carlmont’s musical “Annie Get Your Gun.”

Galisatus pursues music outside of school, and has accomplished things she is proud of.

“My biggest accomplishments are making it into the California All-State Honor Band for three years and also getting selected to play in an honor jazz band on piano earlier this year.”

Galisatus enjoys sharing her passion for music with other people by giving piano and French horn lessons to children and volunteering to play piano for seniors at a senior home.

With extracurriculars, it’s hard for a teenager to keep their grades up, but Galisatus is able to maintain a 4.6 GPA while taking three APs.

“It’s really difficult to manage my time but I’ve learned what I need to do to get everything done. I make a lot of to do lists to stay organized and there is no better feeling than crossing things off,” said Galisatus.

“Christina is so nice and such a dedicated and hard worker,” said junior Natalie Tussy.

Even with the stress and her busy schedule, Galisatus is always willing to help others.

“Christina is such a beautiful person inside and out. She’s always willing to help people. She’s always positive and super nice to others even with people she doesn’t know,” said junior Madison Norman.

Junior Adelyn Yau said, “Christina is such a caring and genuine person and puts in 100 percent effort in everything she does.”

Galisatus’ dad, being a musician as well, motivates her to want to keep playing music and improving.

Galisatus said, “I look up to a lot of people but my biggest musical inspiration is my dad. Every day I find out something new about him that amazes me, but he’s so modest regardless of what he has achieved. He provides the constructive criticism to help me improve through his role as a musician and the unconditional love and support to keep me motivated through his role as a dad. It’s a great balance that I’m lucky to have.”

Keeping her options open, Galisatus hopes to attend a college where she is able to pursue her passion for music.

“I don’t know what college to go to, but I’ve been looking into different colleges and conservatories and there are a lot that I’d love to go to. It depends on which instrument I decide on and also if I want to go to a university or a music conservatory.”

Even though Galisatus doesn’t know exactly where she wants to attend and what she wants to do after college, she keeps a positive mind.

“As of now, I’m just keeping my options open and doing what I can to prepare myself for anything. I know music will be a significant part of my career though,” said Galisatus.