Student Absenteeism bigger than you think

Missing one day of school may seem harmless, but it can have massive consequences.

“Missing one day of school is hard to recover from and sometimes can’t even be recovered,” said Carlmont High School sophomore Rohan Mantena.

Students that miss school struggle to recover from the missed lessons or tests they have to make up out of class. Even if students warn their teachers ahead of time of their absence, it still can cause problems in their education.

School absences make the students fall behind in the class and it is very hard for teachers to keep up with all the absences of their students.

“After a student misses more than days in a row, it is very hard for me to help them recover and get back on track,” said Melissa Hero, a teacher at Carlmont.

In earlier grades, it is shown that students with poor attendance tend to be poorer readers or even be held back a year.

By sixth grade, if the student is chronically absent, a study conducted by the University of Chicago shows that they are more likely to drop of high school then students who are not chronically absent. The higher level the grade, the more important attendance becomes.

Student absence is a growing problem for schools and is a problem that can be inevitable for the students. Absence could be due to many things such as sports, weather, illness, bullying, and vacations.

The most common reason for absenteeism is student illness, which is unavoidable. Lawrence Berkeley National Laboratory, led by Mark Mendell has found one of the reasons of illness of the students is the air quality or fresh air. During the Berkeley Lab’s research, they collected data from around 150 classrooms in California.

The Berkeley Lab realized that half of the ventilation systems were old, outdated, and didn’t meet state ventilation standards leaving the students with worst air quality. This led them to research more and finding that school with updated ventilation absent rates due to illness reduced to about 3.4%. This shows that if many schools kept up their ventilation then it will make a change in the number of students with chronic absenteeism.

A school’s location is also a large variable in this problem. States such as Maryland and Washington have the highest chronic absenteeism in the United States. These locations are prone to bad weather like rain or snow, which can cause the students’ immune systems to weaken to the point of illness, making them miss days of school. (Mother Jones, via Attendance Works)

One way school districts have tried to prevent the amount of student absence is by applying rules that students cannot pass a class with a certain amount of excused or unexcused absences. However, sometimes illness becomes too much and students are forced to miss school.

The most common re 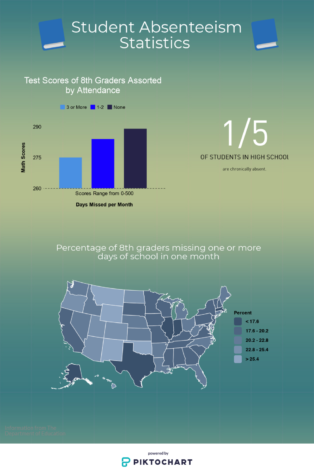 ason for absenteeism is an illness.

Another reason students are missing valuable days of school is bullying, a problem that can’t be easily solved.

“I understand where the students are coming from but it still shouldn’t be a problem in this day and age. Also, it is very concerning that students are being bullied enough to ruin their education,” said Cole Kempinsky, a student at Carlmont High School.

Even the government has started to pick up on the students being chronically absent. The Every Student Succeeds Act (ESSA) have added laws that make it that the report cards that are sent home must put information about the student’s attendance. This allows the student’s parents to become involved and try to enforce the student to attend school rather than missing it.

Though chronic absenteeism is a critical problem in America’s school system, there is still hope for students and schools.